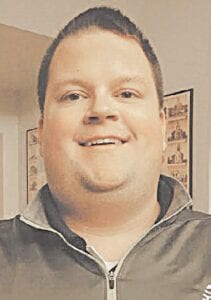 Farmer, who passed away of natural causes Saturday, April 24, at his home, was one of Swartz Creek’s greatest supporters and promoters.

With his contagious smile and perpetually positive outlook, Farmer made everyone he met his friend. Tributes across social media are filled with words like kind, thoughtful, dedicated, sweet and genuine, as well as leader and role model.

“He was truly the best person I ever knew,” said Farmer’s aunt, Heidi Zuniga. “He did not have a mean bone in his body. If anyone loved our community, it was Jentery Michael.

“He was an angel God blessed this earth with. We were only so lucky to have him with us. He will be so missed; we are all just so heartbroken.”

Farmer, who was 27 years old, served on the Swartz Creek City Council, Planning Commission and Parks and Recreation Advisory Board, and the Hometown Days Committee.

Farmer was always willing to pitch in, and when he got involved in a project or event, he did it with his whole heart, she said.

Festival organizers will miss seeing Farmer, with his signature smile on his face, zipping around the festival grounds on a golf cart, visiting every station and offering his help, Huyck said.

The committee is working on a way to honor him in this year’s festival, she said.

“This is a huge loss for the community,” Huyck said.

When Farmer ran for the District 4 seat on the Swartz Creek City Council in 2018, he talked about his plans for making the city a great place for families to make memories and “have the same joyful feeling I have when I tell people I’m from Swartz Creek.”

He looked forward to helping shape the future of downtown, and supported the extension of the trail system. Farmer also spoke of his hopes for raising his own family in Swartz Creek some day.

In a letter to the city council, City Manager Adam Zettel wrote that Farmer was “a noble community leader, a true friend and a skilled and sincere man of many aspirations.”

“I have always found him to be a role model … because of his indefatigable optimism, kind heart and sincere nature,” Zettel wrote.

Mayor David Krueger described Farmer as “a person who, from a very young age, had a heart for serving the people he lived among and making this a much better place to live.”

“Hopefully, his attitude and his willingness to serve this community will be an inspiration to others,” Krueger said.

John Knickerbocker, one of Farmer’s many close friends, said mere words cannot do justice to this “kind and gentle soul.”

“He was one of a kind,” Knickerbocker said. “Jentery wore his love for his family, friends and community on his sleeve. It was very evident; he was never shy about sharing that. That’s something we can all take and remember.

“He enjoyed life, enjoyed people, and that was quite evident in his smile. If he was working his tail off at Hometown Days, he still had that little grin of his … whatever he was doing, because he was enjoying it, enjoying being around the people and giving back to his community.”

Farmer had great plans for making Swartz Creek a “beautiful community” for all to enjoy and love.

“This was his community, where he grew up and where he lived and wanted to do everything he could to make it better for everyone here,” Knickerbocker said. “We all saw and knew the potential he had to do great things. To have that taken away is devastating.”

“He was just so full of life, so happy,” said Joanie O’Sullivan-Butler, owner. “He just had a really positive outlook on everything. He lit up our office every day. He was never in a bad mood. Everyone loved to be around him.”

“As a company, we are at a loss right now; we miss him so much,” she said. “He was very inclusive of everyone. When people start working here, he would just call them at random and ask how it was going. He was very caring, and you just don’t find people like that, anymore. He genuinely cared, and that’s rare in this world.”

Farmer also served as a counselor and Mission Team member at Camp Copneconic, and chairman of the Partner with Youth Scholarship Fund for the YMCA of Greater Flint.

A post shared on the YMCA Camp Copneconic Facebook page stated, “His heart was in everything he did and was with everyone he met … his affection for those around him and contagious smile and laugh will be greatly missed.”

Farmer enjoyed beekeeping, playing cards, ax throwing, good cigars, good beer, and getting together with family and friends. He also was a frequent blood donor.

Contributions in Farmer’s memory may be made to YMCA Camp Copneconic, 10407 N. Fenton Road, Fenton, 48430, or the Swartz Creek Area Fire Department. Memorial donations may be dropped off at Swartz Creek’s city hall.