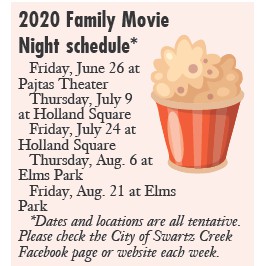 The featured film is the 2007 action-adventure flick “National Treasure: Book of Secrets.” The movie is free and will be shown at the open-air Pajtas Theater on Civic Drive, behind Fire Station #1.

Future features are as yet undetermined.

“We decided to reinstate the movies because the current guidelines allow for gatherings of 100 people or less, and we typically don’t have more than 100 people at those events,” said DDA member Erik Jamison. “So, why not keep the events that we can?”

Movie-goers should bring blankets and/or lawn chairs, as well as snacks and/or drinks as there are no concessions available.

The movies under the stars will continue every other week, alternating between Thursdays and Fridays, weather and COVID- 19 permitting.

This year, the movies will be shown using the new, inflatable screen and projection equipment that the DDA purchased over the winter. DDA members plan to show the movies at various venues around town, so watch the city’s website and Facebook page for locations.

Mayor David Krueger, who also serves as DDA chairman, said the movie season was set to open June 12, but the first film had to be canceled.

“We’re keeping an eye on the upcoming ones,” Krueger said. “We’re thinking about rescheduling the ones we miss, at the end of the season. So, it’s all in flux at the moment.”

Cancelations will be announced the week of each scheduled movie.

Krueger said city officials are pleased to be able to provide a special event for area residents after so many annual events have been canceled because of the coronavirus.

“Everyone has been isolated for so long,” said Jamison. “It’s important to maintain that sense of community and continue to provide those events as soon as we can, as long as we stay within the current guidelines.”