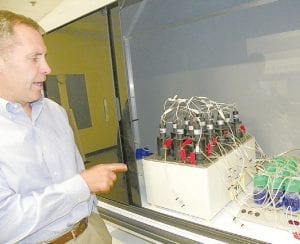 Thomas Guise, CEO of Swedish Biogas explains one of the lab experiments they conduct to analyze bio gas production.

Located at the Flint Waste Water Treatment Plant (WWTP) off Beecher and Linden roads, it is the first and only plant of its kind in the United States that converts human waste into energy.

One year ago, Swedish Biogas International broke ground on the first digester at the WWTP site designed to process wastewater and produce biogas from bacteriadigested biosolids. It is a joint project of SBI and the City of Flint. Expansion plans call for converting a second abandoned waste treatment tank at the site into a biosolids co-digester to produce biogas and biomethane. A Food Waste Receiving Station and Dosing Tank and other upgrades also will be added to the scheme.

“We can make it bigger and make more money for both of us,’’ said Thomas Guise, Swedish Biogas International CEO.

Guise is seeking private investment for this Phase II development and expects to have financing secured by September. If all goes according to plan, the second million gallon digester will be online by the first quarter of 2012 and a companion 1.6 megawatt electricity generator up and running by next summer, he said.

Modeled after successful “green’’ energy production in Sweden, the overall aim is to generate enough biogas and biomethane to run the WWTP and incinerator and thereby reduce operating costs. Annual energy cost savings are projected at about $200,000 and with the new additions, the WWTP will almost be energyself sufficient as well as green, Guise said.

SBI operates seven plants in Sweden where enough biogas is being generated to fuel cars and even a train.

Guise said it could be a while before vehicle fuel would be available in the United States because it has no biogas filling stations. His personal goal is to create a sustainable society here.

Of 16,000 WWTP’s in the United States, about 7000 to 9000 of them are suitable for biogas conversion, he said. SBI is working on projects in northern Michigan and in Wisconsin. They can also build standalone plants on farms or industrial sites patterned after the Flint Township pilot project.

“We plan on staying here, this is our corporate headquarters,’’ Guise said of SBI’s office and laboratory on the campus of Kettering University.

Tracy tucker, township economic enhancement director, said the plant has met expectations but has not had much communication with township officials since it began operation. Some final inspection permits still are pending and paperwork for Phase II has not been submitted yet to the planning commission, she said.

Job creation, one anticipated result of the biogas plant, has been slower to develop.

SBI has about four full-time and four parttime employees including Kettering students. As the business grows, more jobs will be created but most require four-year degrees. The Biogas Plant is run by existing WWTP operators.

Chad Antel, Biogas Plant director of operations, moved his family to Grand Blanc from Ohio when he took the job. He is totally committed to a green future and would like someday to offer public tours of the plant. He’d also like to educate school groups about how waste produced daily can become a renewable energy resource.

“It is important to the city and the industry to have facilities like this,’’ he said. It is more than just a place of business, he said, it is a demonstration of how committed people can create an energy-efficient future.