Swept up in the spirit of Christmas 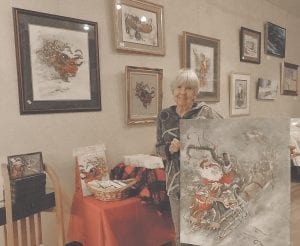 Prolific watercolorist Peggy Abrams will show and sell items from her private collection during the annual Christmas at the Gallery sponsored by the Swartz Creek Area Art Guild through Dec. 15. Photo by Lania Rocha

Peggy Abrams is one of the most prolific Christmas artists in the world. Her windswept Santa watercolors have been licensed and sold by a variety of major organizations such as National Geographic, the Smithsonian, the National Audubon Society, Bentley House and Home Interiors. Abrams’ work has been turned into cookie jars and figurines, and featured on greeting cards, puzzles, ornaments, cross-stitch kits and more. Google “Peggy Abrams,” and a lengthy list of options pops up. Yet, outside the art world, the diminutive watercolorist lives a quiet, albeit busy, life.

The art guild will sponsor a reception from 1-4 p.m. Nov. 18 at the gallery, 8048 Miller Road, Suite G, to showcase Abrams’ work and the work of the many other member artists. “Peggy Abrams Christmas at the Gallery” will continue through Dec. 15.

“I’m giving up my private collection of originals and matted prints,” said Abrams, 86, who recently moved to Linden from Swartz Creek, where she lived for decades and created the bulk of her vast portfolio. “I have no room. They’re all for sale.”

Abrams’ daughter, Kathy Stiff, said Abrams has more than 750 images in print. Much of her work is getting hard to find.

The featured collection at the gallery includes many originals that never were released and have not been seen by the general public, Stiff said.

“People recognize her for her Christmas (items),” said Stiff. “She has a style all her own. She’s not a typical watercolorist. She likes texture and depth. She loves to ink. She loves to use gold.”

Abrams signed with Bentley House, one of the Bentley Global Arts Group brands, in 1990. From her studio at her home in Winchester Village, Abrams worked in a variety of media.

“Bentley House didn’t take Christmas pictures,” she said. “I kept sending them Christmas, though. It took me about three years to get them to take it, and when they did, it exploded. Retailers couldn’t keep it in stock.”

As a child, Christmas was Abrams’ favorite day.

“I grew up in Lennon, way out in God’s country,” she said. “We got homemade gifts. My mother always made sure to stuff our stockings with candy canes and popcorn and oranges. We might get a pencil box. We had a tree and we decorated it with ornaments we made. We knew other people celebrated differently, but it didn’t bother us. We had a good time anyway, because it was Christmas. Now, I have all the toys I want, in pictures.”

The first Santa Abrams marketed, the Windswept Traveler, was inspired by a picture of Rip Van Winkle.

“I saw it in a book,” she recalled. “He was walking up a hill, holding a cane. That’s what I saw, a windswept traveler.”

Abrams’ Santas always carry packs of toys which have significance that even collectors of Abrams’ work may not know.

“I have three drums, for my three brothers, and three dolls, for myself and my two sisters. Usually, on the hat, there’d be bells for my grandmother, mother and dad. And stockings, usually blue for my grandson and pink for my granddaughter. And the last thing I put in is an airplane, for my husband.”

Abrams’ husband, Joel, passed away Dec. 21, 2016. Decades earlier, he had suffered a stroke that left him unable to work. Peggy Abrams’ art gave her the ability to earn a living and stay home to care for her husband.

In 2014, Abrams was inducted into the Zonta Club of Flint Hall of Fame. In 2011, she received the Angel Award from the Girlstown Foundation of Michigan.

For more information on Christmas at the Gallery, visit the art guild’s website at swartzcreekareaartguild.org.