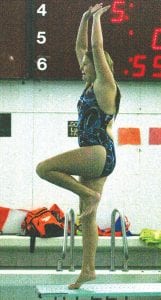 FENTON — The Carman-Ainsworth/Flushing varsity girls’ swim and dive team may have had its struggles this year, but recently the squad’s horizon just got a whole lot brighter.

That’s because, despite facing much larger programs from all across the county and beyond, the Lady Cavs were still able to come in fifth with a score of 200 at the 10-team Genesee County Meet last weekend.

Winning the event with 557 points was Grand Blanc, host Fenton was second with 275 and Brandon third at 229. That left Powers in fourth with 216, Lapeer was sixth at 184 and Davison had 180. Holly and Kearsley Clio tied for eighth with 131 and Swartz Creek was 10th with 86.

Carman-Ainsworth/Flushing hosted Midland for a Saginaw Valley Association meet today. The Lady Cavs also have home league contests on Tuesday against Powers and Oct. 11 against Davison before traveling to Bay City Central on Oct. 16.