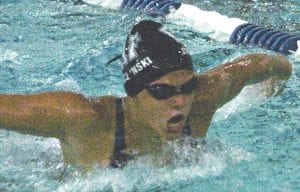 Emily Stemczynski competes in the butterfly for the Carman-Ainsworth/Flushing varsity girls swim and dive team.

FENTON — Starting with today’s diving competition, Fenton will host the Genesee County Girls Swim and Dive Meet, which runs through Saturday and pits the Carman- Ainsworth/Flushing varsity team against some of the areas top squads. This includes local powerhouses like Grand Blanc and Fenton, as well midsize programs like Swartz Creek and Holly and other co-op teams such as Lapeer East/Lapeer West and Kearsley/Clio.

One area the Lady Cavs will look to take advantage of is their ability to transition smoothly from one swimmer to the next in relay races, which is exactly how Rebecca Hrit, Emily Stemczynski, Kenzie Bartlett and Andrea Bade placed first in the 200 medley relay on Sept. 18 at home against Flint Southwestern/Flint Northern followed by Dorothy Dollinger, Ashleigh King, Mara Johnson and Taylor Wheaton in the runners up spot. That same day Carman-Ainsworth/Flushing’s Andrea Bade, Selena Adams, Kayla Seeley and Allia Howard also won the 200 free relay and Rebecca Bade, Jennifer Messina, King and Dollinger placed second.

As for the sprint races, look for Lady Cavs such as Selena Adams, Kenzie Bartlett and Dollinger to make their mark in the 50 free while the 100 free may features names including Stemczynski, Mara Johnson and Rebecca Bade. On the other end of things, Carman-Ainsworth will also be looking to hold its own in the longer races like the 500 free by relying on swimmers such as Kayla Seeley, Allia Howard and Kenzie Bartlett.

What that leaves for the Lady Cavs are the specialty events including the 100 back, where Stemczynski and Rebecca Hrit have been key. King and Andrea Bade have been playing those same roles for Carman-Ainsworth/Flushing in the 100 breast, as well.