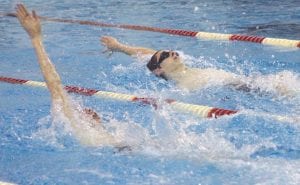 Carman-Ainsworth’s Tyler Pangerl (top) holds a slight edge over Swartz Creek’s Evan Eldred in the backstroke during the Dec. 4 meet at Creek. Pangerl won the event by less than a second, and the Cavaliers won the meet, 94-92.

SWARTZ CREEK — Carman- Ainsworth pulled out an exciting victory in its first swimming and diving dual meet of the season, edging Swartz Creek, 94-92, on Dec. 4 at Swartz Creek Middle School.

The Cavaliers won five of the last six events and took second in the meetending 400-yard freestyle relay to edge the host Dragons.

The Cavaliers have been off since then and will swim their home opener tomorrow against Saginaw Arthur Hill.