Switch Bakery wins over customers with its vegan sweet treats 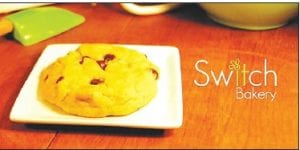 SWARTZ CREEK
— It’s not everyday that a graphic design major turns into a baker. But such was the case of Swartz Creek resident Ben Schmitt and his budding bakery business, Switch Bakery.

Schmitt, who graduated in 2009 from the University of Michigan- Flint with a degree in graphic design, decided to go the culinary route during his final semester of college.

“I have been baking forever with my mom, starting with sugar cookies and it progressed,” he said. “I never thought of it as a way to make a living.”

The culinary bug bit Schmitt, 24, when he was designing a birthday cake for his mom’s birthday. “It was 50 pounds and I just found my passion,” he said. “I melded my graphic design background with pastries.”

Schmitt started Switch Bakery in early September, and works out of a licensed kitchen in Ann Arbor. What sets Switch Bakery apart from others is that the business is an allvegan bakery, using the highest quality organic flours, Madagascar vanilla and spices. All products are completely vegan, which means dairy-free, casein-free and egg-free. The bakery also offers some glutenfree products, and any cookie for sale can be requested glutenfree. He opted to make his bakery an all-vegan to tap a segment of the community normally excluded from baked goods. “I wanted to reach a demographic that was overlooked,” he said. 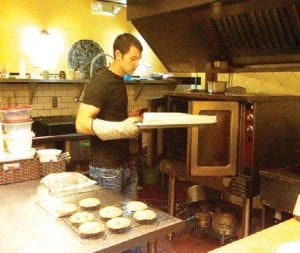 Although he works out of an Ann Arbor kitchen, Schmitt sells his products online at www.switchbakery.com.
He also sells his items at several area stores, such as Dale’s Natural Foods in Flint Twp., Oliver T’s in Grand Blanc, The French Laundry in Fenton and Good Beans Cafe in Flint. In addition to selling locally, Schmitt also uses Michigan-made products for his bakery items, including Pioneer Sugar and dry ingredients from Westwind Milling Co. His goal is to eventually have a store front where customers can directly purchase items.

And what has his customers said so far? “I’ve gotten very good response from my customers,” he said. Schmitt attended several local farmers market this year where he gave samples for potential customers to try.

“People were wary at first, but they were pleasantly surprised after they tried it,” he said.

Along with online ordering of products, Schmitt accepts special orders for events. For more information on Switch Bakery, including prices of bakery items, visit www.switchbakery.com
or e-mail Schmitt at switchbakery@yahoo.com.