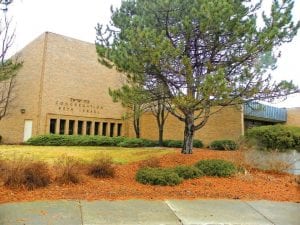 The sprawling Jewish synagogue, on a 40-acre campus, near Calkins and Dye roads, has been around for 40 years, but may soon downsize.

FLINT TWP. — The end of an era may be coming soon for Congregation Beth Israel and the surrounding community near Calkins and Dye roads.

For 40 years, the sprawling Jewish synagogue, on a 40-acre campus, has been a religious, education and community center. But the building and grounds have been up for sale for the past year after the dwindling congregation reached a decision that it is time to downsize.

Leonard Meizlish, president of the congregation, said the 32,000 squarefoot facility is too big for them.

“It is sort of alike a family that grows up and the kids leave and the home gets too big,” he said. “We have a situation where the congregation is reduced in size because of the demographics of Flint.”

The congregation was three and half times the size it is now when the synagogue was built in 1972, he said.

The congregation dates back to the 1800s when early meetings were held in private homes and storefronts. The synagogue has served the Flint-area about 95 years and was previously located in Flint on McFarlan Street and then on Hamilton Avenue before moving to Flint Township.

It is known for opening its doors to the surrounding community for events including its annual Holiday Bazaar and summer rummage sale held in the lobby and social hall.. Meizlish said the congregation intends to continue hosting such community events after it moves.

“We’re not dissolving in any way,” he said. “We expect to be more efficient in a smaller building.”

A new location has not yet been selected pending the sale of the current building. Meizlish said. But he speculated that the new home will not be far from the current one.

There’s been considerable interest expressed in purchasing the building including from other churches and a charter school but so far no firm offers.

Congregation Beth Israel has an adjacent educational wing which houses a religious school shared with nearby Temple Beth El.

The facility includes a commercialsized kitchen, a sanctuary that holds nearly 400, a social hall that also holds about 400, office, a library, conference rooms, paved parking for about 270 cars and more. Facilities also are available for rental.

The sale is being handled by Cooper Commercial.