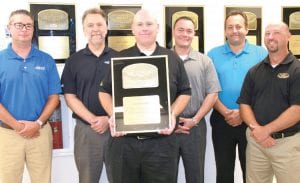 HOLLY — Szott Ford takes great pride in providing exceptional service to the community they call home, and far beyond. And because of their attention to customer service, the dealership recently won the President’s Award for the sixth time. This year’s award marks the fifth consecutive year the dealership has been presented with one of the plaques for their outstanding service.

The President’s Award spotlights dealerships with the highest rate of customer satisfaction, and was recently presented to the Szott Ford dealership, located on Holly Rd. Eligibility for the award, which began in 1998, is determined via customer survey responses.

In order to achieve the President’s Award, dealers must exceed customer expectations every day in every department. The pursuit of excellence requires passion, tenacity and hard work. The award salutes those top-performing Ford dealerships that embrace these philosophies, achieving the highest levels of customer satisfaction in both sales and service.

“Ford gives out a lot of awards, but the President’s Award is their top echelon award,” said General Manager Steve Gabbara. “Only about ten percent of Ford dealerships in America get this award, and it’s truly the award that represents the fact that a dealership is a complete team. You can’t win it for sales or for service, everybody has to pull their weight.”

Gabbara explained that the dealership finds customer feedback “extremely valuable,” saying that each survey or rating the dealer receives represents an opportunity for the team to improve, correct or adjust their procedures accordingly. Negative reviews, said Gabbara, are actually the most valuable, because they offer the most ability for growth and understanding.

The team at Szott Ford is extremely proud of the environment they’ve created, fostering a sense of cooperation, communication and community. Gabbara says that customers can feel that sense of solidarity as soon as they walk in, which puts them at ease and removes the stress of buying a new car.

“It’s about the culture we’ve created,” said Gabbara. “When I started here, I saw a great opportunity to help create an environment that was good not just for the customers, but for the employees as well. I’ve always believed that an unhappy or unsatisfied employee cannot generate a happy or satisfied customer. It’s gotta be real, and it’s gotta be genuine.

“It’s not just one person or department that helped us win this award, it’s not the management any more than the porters that wash the cars or shovel snow,” Gabbara continued. “And I think that’s the secret to our success – you can’t put a finger on the most important part of the process, because the process itself is what’s most important.”