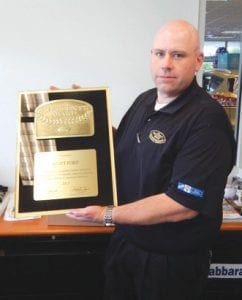 Steve Gabbara’s team at Szott Ford in Holly is on a roll. For the second year in a row, and for 3 of out the last 5 years, Szott Ford has earned The President’s Award from Ford Motor Company. The award is given “in recognition of outstanding customer satisfaction through progressive management, dedicated employees and high standards of operational excellence.”

“Only the top 10% of dealers earn this award,” says Gabbara. Noting that Ford’s criteria for the award grades all aspects of a dealership from sales to service, Gabbara proudly says, “This truly is a total dealership award.”

Szott Ford, formerly Holly Ford, has been owned by Tom Szott and his sons Todd and Thad for 12 years. Gabbara has been with Szott for 11 years working as Sales Manager, General Sales Manager, and now General Manger.

“Happy employees make even happier customers,” Gabbara says. In a business that traditionally is perceived as stuffy, Gabbara pioneered an atmosphere at the dealership where employees are allowed, even encouraged, to have fun at work by cranking up the tunes and making use of the ping-pong and foosball tables in the showroom. Szott’s customers are welcomed into a relaxed environment with friendly faces and an experienced, knowledgeable staff.

Gabbara says the dealership’s consistent success is also thanks to their returning customers. He credits his service department for helping build customer loyalty. “Our service department’s high achievement is something I am really proud of,” Gabbara said.

“People enjoy doing business with people they know,” says Gabbara. Two of his top sales people, Dan Kittle and Renee Weeks, grew up in the Holly area. The dealership takes part in and supports downtown Holly events like the Dickens Festival and donates to community groups like the Little League. Gabbara also works with Ronald McDonald House and Children’s Miracle Network charities.

“We are really fortunate to have such a great team here,” says Gabbara. “It’s really phenomenal for our customers to come in and see the same faces year after year. We have good people and our customers are very comfortable with them.”