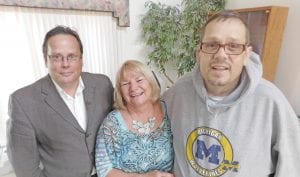 Doug, Bonnie and Keith O’Neal. Keith, founder of the Good Samaritan Network, is recovering from quintuple bypass surgery. His brother, Doug, is reaching out to the community to help with his expenses.

CLAYTON TOWNSHIP — Keith O’Neal is used to lending a helping hand, but now he needs help.

O’Neal, an ordained minister and professional trumpet player and singer, is known throughout Genesee County for his contract work with Teen Quest, a program that teaches job skills to teens, and as the founder and director of the Good Samaritan Network, an organization that has assisted thousands of local people in need.

Because he works as a consultant and private contractor, all of his income ceased in mid-June when a bout of pneumonia led to quintuple bypass surgery and, now, weeks of recovery.

“You’re never ready for these kinds of things,” said O’Neal.

The man who has “no trouble asking for help for others” has no money coming in and the bills are stacking up.

“We’ve cut back on everything we can,” said O’Neal’s wife, Bonnie. “All of his ways of earning money have stopped.”

O’Neal’s brother, Doug O’Neal, rushed to his aid, setting up a gofundme account to raise enough money to get the couple through the summer.

“My concern is that Keith has given his heart and soul to help families for a long time,” said Doug O’Neal. “He’s not good at asking (for help for himself). We need to get the message out there that this is an opportunity to give back to someone who has given so much.”

Keith O’Neal has helped in a variety of ways. He has coordinated drug-free New Year’s Eve parties for teenagers, headed-up fundraisers for families who have lost their homes to fires, organized anti-prejudice and homework support programs and coordinated coat drives. For 25 years, he was team pastor for many area high school football programs.

O’Neal founded the Good Samaritan Network after learning of an area boy with cancer who could not return to his home due to asbestos in the environment. O’Neal raised $70,000 to gut the house and make it safe for the family to return. The boy is now a freshman at Eastern Michigan University, and cancer-free.

Most recently, O’Neal assembled a team of workers to build wheelchair ramps for a Flint Township cancer survivor caring for three family members who use wheelchairs.

“(Keith) has been on the front lines so many times,” said Doug O’Neal. “He and Bonnie have given and given. Now he needs to rest. If something happens to him, that charity, that heart in the community, will be lost.”

To help his brother pay the bills through the summer, Doug O’Neal is trying to raise $12,000. Anyone wishing to contribute may do so online at https:// www.gofundme.com/GSNhelp-gmailcom, or through the Good Samaritan Network website at www.gsncares.com/#!join-gsn/c7v2.

“We like helping people,” Keith O’Neal said. “I have zero inhibitions looking at people and saying, ‘please help this family.’ But when it’s my turn, I can’t ask.”