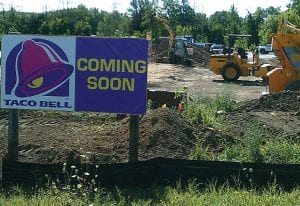 Work crews started moving dirt at the site on Miller Road, just east of Elms Road, about two weeks ago. Developers expect the eatery to open in November.

SWARTZ CREEK — Swartz Creek residents, and passers-by, soon will be able to get their gorditas and chalupas close to home.

Taco Bell also has a restaurant about 2 1/2 miles away on Linden Road north of Miller Road in Flint Township.

Much of the Swartz Creek business is expected to be at the drive-thru, said Bueche.

Entrance to the restaurant will be on Elms Road south of Miller Road, he said.