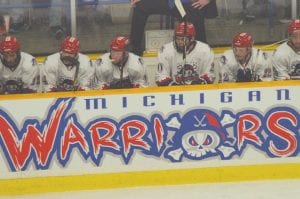 The Michigan Warriors gathered on the bench during a timeout.

TOPEKA, Kan. — This past week, Lapeer native and Warriors goaltender, Robert Tadazak, was named MVP of the 2010-11 NAHL season for his superb efforts between the pipes.

Prior to that announcement, the Warriors completed the sweep of their best-of-three series against the Bismarck Bobcats at the Kansas ExpoCentre, with a 6-5 victory in double overtime. In attendance for the series clincher were 694 fans.

Andrew Kolb would tally in the first couple of minutes for the 1-0 lead. After Donald Olivieri tied it for the Bobcats, the Warriors would counteract with back-to-back goals from Brandon Boelter and Kevin Gibson. Two Bismarck goals late in the first period evened things at three.

Kolb started out the second period the same way as the first, as he scored his second of the game, and fifth of the playoffs. Bismarck would not only tie things back up, but take its first lead of the game after goals from Daniel Zawacki and Daniel Ray. The Warriors pulled even when Scott Henegar converted on the power play late in the period, making it 5-5 at the end of the frame.

Not only would the third period not be enough, but neither would overtime. At the 12:13 mark of the second overtime, Ryan Trenz scored, finally putting an end to the game and the series, with the 6-5 win. With the win, the Warriors advanced to the round-robin tournament to compete for the Robertson Cup.

Their first round-robin game was Tuesday evening, and resulted in a 5-2 loss to the Amarillo Bulls in front of 407 fans. The Bulls jumped out to an early lead, which was answered moments later with an A.J. White goal.

Three straight Amarillo goals put the Warriors in a deep hole, and when Michael Szuma scored in the third, it was just too little, too late. The Bulls’ Luke Jenkins put the Warriors out of their misery with an empty-net goal to seal the win for Amarillo.

The Warriors are guaranteed at least two more games, and basically need to win both to have a shot at the Robertson Cup. They played the Fairbanks Ice Dogs on Wednesday after press time, and the Topeka RoadRunners today.