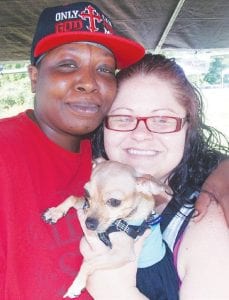 FLINT TOWNSHIP – Edith Campbell beamed as she tousled the ears of a wiggly canine.

“She still remembers me,” said Campbell, who rescued the dog, Coco, two years ago from a home on the north end of Flint. Coco’s previous owner had died and the dog was left to fend for herself.

Campbell took Coco to PAWS, a no-kill, non-profit animal rescue in Clayton Township, where she was cared for before being adopted by Barb Olson and Robert Wolff.

Coco was one of many PAWS alumni who made guest appearances at the 2nd annual Tails & Trails dog walk and fundraiser.

The event took place Saturday at the Flint Township police station and park. About 100 people and 50 dogs helped raise more than $5,000 for PAWS.

“I thought it went really well,” said Glenda Beatty, PAWS founder. “We had lot of comments from people who thought it was a good event.

“I heard people say they enjoyed it because it brought a lot of different people together, animal lovers, dog lovers. Of course, the weather was beautiful. I think the whole thing went together really well.” 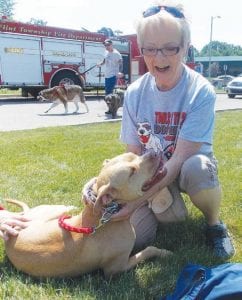 Edith Campbell reunites with Coco, a dog she rescued two years ago. Campbell is a PAWS volunteer who helped organize the Tails & Trails fundraiser for the non-profit, volunteer animal rescue.

A portion of the proceeds will go into PAWS’ general fund to support the rescue operation and provide emergency medical care for shelter animals and new rescues.

Additional money will go to the building fund to pay for a new barn, said Beatty.

“The support of the people … has always been very important to us,” said Campbell, an event coordinator. “We turned to them again to support this year’s events, like the dog walk. Next year, we will embark on a new journey.”

Highlights of this year’s event included a demonstration by the Michigan Search & Recovery dogs, and an appearance by Michigan State Police K-9 Officer Sulley, said Campbell.

Dogs were treated to massages, “peticures” and Reiki at the “doggie spa,” and created their own, original works of art at the PAWcasso concession, said Campbell. 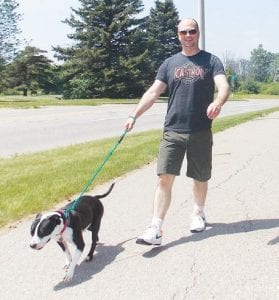 Dave Echolz, of Grand Blanc, takes a stroll with June, a PAWS dog currently available for adoption. June spent most of her life chained to a tree before being rescued from a home in northern Michigan, Echolz said. She needs a little TLC, but she has “the sweetest disposition,” he said.

The American Red Cross demonstrated dog CPR. Free microchips were available. Dogs who had been adopted from PAWS received “Alumni” bandannas and posed for a group picture.

A few event T-shirts are still available by calling 810-767-6366 or email edithwriter@aol.com.

PAWS cats and dogs are available for adoption from noon to 4 p.m. Saturdays and 1 p.m. to 4 p.m. Sundays at the Grand Blanc Petsmart, and from 11 a.m. to 3 p.m. every fourth Saturday of the month aqt the Miller Road Petco.

PAWS also has a booth from 10 a.m. to 3 p.m. Sundays at the Grand Blanc Farmers Market. 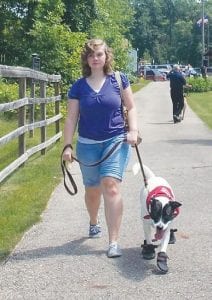 Lindsey Schulte of Chesaning walks Chelsea, whom she adopted from PAWS in February. Schulte said the adoption has been a great experience.