Take a stick, leave a stick 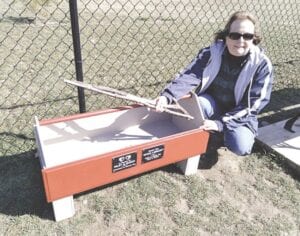 SWARTZ CREEK — Frequent visitors to the dog park in Swartz Creek’s Elms Park will notice a new addition to the canine play place: a stick “library.”

Nameplates affixed to the front of the wooden box ask guests to take a stick or leave a stick, and let folks know that the library is dedicated to the memories of Riley and Buddy, two best friends who are now chasing sticks together in doggy heaven.

Councilwoman Rae Lynn Hicks came up with the idea for the memorial stick library after her beloved dog, Riley, passed away Feb. 12. Buddy, who lived next door with his person, Mike Smith, passed two days later.

“It wasn’t my original idea,” said Hicks. “I saw, on the news, a report about a guy who put one in his yard and I thought it was cool thing to do. Dogs love sticks.”

Riley was part of the Hicks family for 13 years. 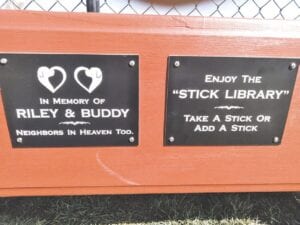 “She was a rescue puppy,” said Hicks. “A friend found her just wandering around when she was little, and since my friend already had three dogs, she asked us to take care of her.”

Hicks quickly fell in love with this little furry friend with big eyes and a sweet disposition.

“She was just about as lovable as they come,” Hicks said. “She was a good, friendly dog.”