Taking a leave for a new lease on life 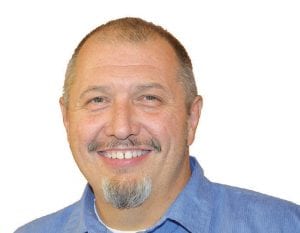 I’ve been the managing editor of the View Newspapers and Davison Index for nine years and it has been, despite my frequent complaining, a great job. We’ve built the Genesee County papers from just three when I came aboard in the summer of 2008, to six newspapers reaching nearly 100,000 homes in the county weekly.

It’s a job where, for the first time in my career, I feel like I’m finally home. Probably because this is my home, having lived in Genesee County my entire life. I grew up in Davison, held my first job in this business at a now defunct weekly newspaper chain, and I’ve watched my kids grow up here attending the schools I once went to.

Life has been good, after several hard years where I suffered from personal losses and setbacks, but now I’m in the fight of my life. Those bad years led to bad choices, which continued for me even after I should have been happy for what I had.

Those bad choices ultimately led to a medical diagnosis five years ago, when I found out I was suffering from cirrhosis of the liver. When I learned I had this disease I will admit, I didn’t take it seriously enough. So last fall when I ended up in the hospital suffering from kidney and liver failure, my time had finally run out.

I was told then I would need a liver transplant, probably sooner than later. The doctors got my body back up and running, but I had to make serious changes to my life and started adhering very strictly to everything I was told to do.

After two more hospital stays, which have left me using oxygen and off and on retention of fluids in my body, I am now going to need that transplant much, much sooner. In fact, as I write this, I am on leave from the newspaper and I am awaiting the phone call from Henry Ford Hospital in Detroit which may come now, tomorrow, a week from now or next month — but it will need to come soon before my liver completely gives up on me. In my absence, please contact Lania Rocha at 810-452- 2652 or email her at lrocha@mihomepaper.com. She will be taking my place until I return.

As I go into what will be a new lease on life for me, I go with an excellent support group of family and friends. My girl, Anita, who has been my rock, never lets me give up, never lets me think the worst. There are also my kids, Lucy and Sam, always supportive, always loving and always my source of comedy relief. And Nate and Sarah, Anita’s son and daughter, who always are there with a hug and words of comfort.

When I return to start this new chapter in my life, I plan to detail my journey in a series of articles. I hope to draw attention to the need for organ donors and about the transplant and illness I have been fighting these past years.

But as Gen. Douglas MacArthur said, when he was driven from the Philippines during World War II, “I shall return.” And I will, I promise. ggould@mihomepaper.com