By Vera Hogan
Of The Tri-County Times 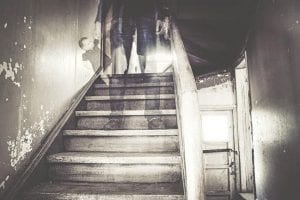 Spirits are said to visit most often at night when people are sleeping. They don’t seem to want to hurt or frighten anyone — they’re just visiting. Photo provided

Are there actual haunted houses? Do they really exist or are they the figment of vivid imaginations?

In ghost lore, a haunted house or ghost house is a house or other building often perceived as being inhabited by disembodied spirits of the deceased who may have been former residents, were familiar with the property — or died there.

More scientific explanations for the belief that a house is haunted include misinterpreting noises naturally present in structures, like creaking wood floors, waking dreams, and the effect of toxic substances in environment that can cause hallucinations. This includes metals, including lead and mercury, pesticides, toxic solvents and gases.

Residents who occupy city of Fenton haunted homes are adamant that ghosts exist.

Many friends and neighbors shared their stories with former Times Features Editor Jan Rynearson in October 2002. Rynearson, who lived in a historic home (built in 1880) on Shiawassee Avenue in Fenton, died in February 2011. It is unlikely that due to the number of homes she wrote about, that the spirits have since gone away.

Most homeowners requested anonymity for fear people would think they are delusional. They also would not share their exact addresses for fear of being harassed.

In an old home on Fenton’s High Street, the homeowners kept hearing chamber and classical music in the middle of the night. Upon investigation, they found no radios or TVs left on. As this continued, they learned that two maiden ladies lived in the house more than 80 years ago and had taught piano.

Another homeowner on High Street never had strange happenings in the house until shortly after a former owner died. Then, one night, the family dog began walking around, sniffing at the walls, when a heavy bag of groceries in the kitchen set in the middle of a table mysteriously fell to the floor with a bang, but nothing was broken. And the lady of the house heard “someone” call her name.

People living on South Adelaide Street in Fenton were flabbergasted when they saw misty faces in a mirror. Another family on this street reported the heavy front door flying open on various occasions, hearing footsteps and having the feeling of being pushed down the stairs.

Occupants in a home on Fenton’s Main Street had trouble keeping a candle in an antique, floor-style candelabra. Family members would be sitting in the room and the candle would flip out from the center holder and fly across the room.

(her husband worked nights) to see an apparition of a woman in a long gown with flowing hair.

“I was so petrified, my voice failed,” she said. “I couldn’t call to my children sleeping upstairs.” For about six weeks she slept with the light on. Ironically, a year later, on another August moonlit night, she awoke with a start. A man, bathed in mist, sat at the foot of her bed.

“I didn’t know what to do,” said the woman. “Finally, I just closed my eyes tight and prayed he’d go away. When I opened them he was gone. I know he must have been looking for her (the woman in the apparition from the year before). I just hope he found her.”

Both apparitions and strange happenings have occurred at another Shiawassee Avenue home. The heavy front door has flown open by itself, things have mysteriously fallen off walls and a rocking chair in a bedroom rocked by itself.

The feeling of force pushing the owner down the staircase was experienced and drapes and sheers in the living room would whip out and strike those walking by, when there was no breeze or no window open.

A minister who lived there more than a century ago was seen in apparition form on the front steps one evening when a teenage neighbor boy was walking his dog across the street. The dog stopped dead in his tracks until the apparition disappeared.

In another Shiawassee Avenue home, the homeowner’s mother experienced an apparition one night when a woman, her hair atop her head, dressed in a rustling gown, appeared in her room. “I tried to yell for family members sleeping upstairs, but nothing would come out,” she said. “I will never forget the scent that this woman wore. If I ever smell it again, I will recognize it.”

The most recent ghostly happening in this house was the slamming of a dining room door at 2 a.m. one morning in April. There is no heat duct near the door and no windows or outside doors were open.

“Generally, these spirits visit at night when most people would be sleeping,” said an owner of a ghostoccupied Fenton home. “They don’t seem to have intent to frighten or hurt anyone. They’re simply visiting.”

The Tri-County Times is part of the View Newspapers Group.