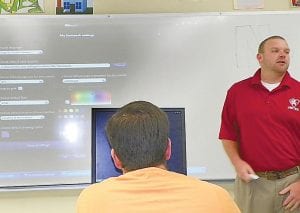 Cory Coombe demonstrates how to draw shapes using an interactive whiteboard and projector.

Comments like those made recently in a Carman-Ainsworth classroom can be music to a teacher’s ears but those were teachers talking.

About 25 teachers have spent the past few weeks — 12 hours total — in a computer lab after school and one weekend learning to use new interactive projectors being installed in their classrooms.

Such raves are common since the district introduced the interactive technology into 41 classrooms last fall. Visitors to schools during “A Closer Look’’ open house program earlier this year had similar reactions to the technology that turns a plain white dry erase board into a colorful magic show.

Best of all, the main targets — students — have embraced it with all the techno-savvy, games-playing fervor of their generation.

“Kids line up to use it and they don’t say a word until they get their turn,’’ said Cory Coombe, a fourth-grade teacher at Randels Elementary who was among C-A teachers trained to use the interactive technology last summer. He’s been using it since the start of the school year.

No more problems getting student volunteers to go up to the board at the front of the class to work problems or perform exercises.

“The kids love it,’’ Coombe said. “They want to go up there. They stay on their lunch period to play on it.’’

One touch of a wandlike, batteryoperated pen brings old-school board work to life. Shapes get swirled around, colored, resized and other special effects. Lines and boxes are drawn and erased with a gentle swipe. Boxes spin like reels on a slot-machine then stop to reveal words and phrases that inspire creative writing and thinking.

Widgets abound. There’s a protractor, a keyboard, a timer, dice, a Sudoku board, a piano keyboard, a calculator, a microphone, chartmaker and many more.

Coombe said he starts his day using the chart widget to teach students to build and read bar graphs.

The projector is the heart of the technology which transfers images to the whiteboard canvas from software on the teacher’s computer. The pen operates similar to a wireless mouse. Coombe explained that sensors in the projector tracks the pen’s movements and responds to commands that open, close, move and manipulate words and images.

One tap on a pre-programmed symbol can instantly link to a growing list of interactive educational web sites.

“I use it everyday in reading,’’ Coombe said. He takes students to web sites where they can listen to celebrity readers like James Earl Jones (the voice of Star Wars’ Darth Vader) demonstrate inflection, enunciation and other oral reading skills.

“They can hear someone besides me reading,’’ Coombe said.

Coombe taught the class for fellow teachers learning to use the projectors and interactive whiteboards. He walked them through the functions of Easiteach software which is a matrix of menus, symbols and commands set up to execute customized lesson plans.

One teacher was thrilled to learn how to integrate an existing PowerPoint lesson onto the white board.

Coombe also gave them a glimpse at Promethean Planet, a web site that bill itself as the world’s leading interactive whiteboard community. It contains thousands of interactive lessons for teachers to help get the most out of the “awesome’’ technology.