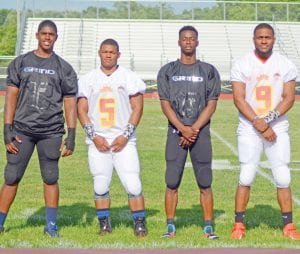 It was a muggy, hot 87 degrees by kickoff which may have contributed to several players backing out of the game, including Lapeer’s Eli Hunt and Mike Marston.

The Grind began its rally in the third quarter. A 7-yard run by Fenton’s Ben Hajciar cut the lead to 17-14.

Goodrich’s Eric Hildebrand then gathered in a 65-yard touchdown pass to put the Grind in front 21-17. But the outcome was still in doubt.

Rise quarterback, Zach Leedom of Grand Blanc, hit Hamady’s Simeon Kemp down the sideline to put the ball inside the 5-yard line. But the Grind held for the next four downs and the comeback was complete.

The Rise had built its 10-point halftime lead with the help of Flushing’s Garrett Oginsky, who hooked up with Kemp on a catch-and-run that put the ball inside the 5.

Carman-Ainsworth’s Cahlil Brownlee looks for an opening to run toward at the inaugural All-Star football game at Davison on Saturday.

Ryan Young of Linden’s short plunge made it 7-0. Oginsky hooked up with Swartz Creek’s Brett Pero to set up a field goal to close the half.

The Rise’s other touchdown came on the very next possession. New Lothrop’s Quentin Taylor intercepted a pass and raced 67 yards for a score to make it 14-0.

Davison’s Tyler North had made his presence felt before the field goal. His catch from Northwestern’s Sahmond Halbert helped keep the Grind within striking distance. – K.W.