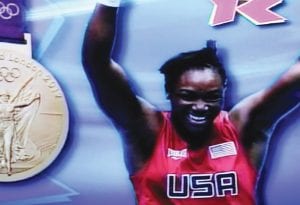 Flint’s Claressa Shields, 17, and of Flint Northwestern, brought home the gold in women’s middleweight boxing. This was the first year women’s boxing was an official Olympic sport.

LONDON, ENG. — To say the 2012 London Olympics were a success for the United States is an understatement. A total of 256 medals were earned, with the women claiming more than twothirds of the US gold medals with 29. USA picked up 46 gold medals, 29 silvers and 29 bronzes in the games that began on July 27 and ended Sunday, Aug. 12.

Michigan athletes bringing home the coveted medals included Flint Northwestern junior Claressa Shields, who won the gold in women’s boxing in its first year as an official Olympic sport. Grand Blanc’s Geena Gall fell short in the women’s 800 meter after failing to make the finals, but Gall posted a 2:03.85 in her semifinal heat, running with an injured left calf muscle.

The big story of the games for the US had to be Michael Phelps, retiring after the games as the most decorated Olympic athlete of all time. He won four golds and two silvers at these games and has 19 medals overall, while a contingent of young upstart female swimmers surprised a lot of people. Missy Franklin, 17, won four golds and a bronze, Allison Schmitt won three golds, a silver and a bronze, while Ryan Lochte won two golds, two silvers and bronze.

The women’s gymnastics team was also golden bringing home the team gold, crowning Gabby Douglas as the gold medalist in the All-Around and Ally Raisman brought home two golds and a bronze. In tennis, Serena Williams claimed the Golden Slam after winning the gold medal and all four Grand Slam tournaments. The Olympic medal had eluded her on the singles side. She and sister Venus also picked up the gold in women’s doubles. Lisa Raymond brought home bronze in women’s singles.

Last Saturday, David Boudia captured the men’s platform diving gold medal in an upset win over China. Boudia was the last diver to make the cut in the semifinals, but saved his best for last. The US also picked up several spring board synchro medals on the men’s and women’s side and several individual medals.

The women’s soccer team got revenge on the soccer pitch, beating Japan for gold, Misty May-Traynor and Kerry Walsh-Jennings became three-time Olympic gold medalists in beach volleyball after beating April Ross and Jennifer Kessey of the U.S. The women’s track 4x relay teams set a new world record in the 4×200 and won the gold in the 4×100 race. The women’s and men’s basketball teams and women’s water polo teams were golden, while the volleyball team fell just short and brought home the silver. Allyson Felix, embroiled in the Olympic Trials possible coin toss in track and field when officials couldn’t determine who had third place, brought home three gold medals, two as part of the relay teams and one individual.

Other key medals include Jordan Burroughs and Jake Varner winning gold in wrestling, Kim Rhode shooting a near-perfect 99 in women’s trap or skeet, the women’s rowing team winning gold and Brady Ellison won silver in men’s archery. A slew of other Americans made the podium in diving, fencing, cycling, rowing, shooting and tae kwan do. The complete list of Team USA medalists is available at www.nbcolympics.com.