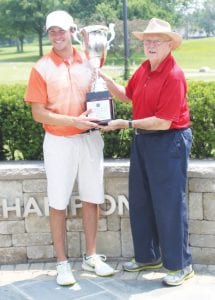 Castanos came in with a par-72 about two hours after Finsterwald had posted his 73 in the first group of the day. The two were seniors on Grand Blanc’s varsity team this past spring.

Defending champion Joe Montpas was third with a 74. The Flushing senior was looking to win his second straight major tournament of the Flint Junior Golf Association season, a week after taking the Mancour Cup at Flint Elks Club. The Mallon Cup Challenge is the second of three straight trophy events on FJGA schedule.

Castanos only started playing golf three years ago, the summer after his freshman year, and is hoping to play on Central Michigan University’s club team next year. 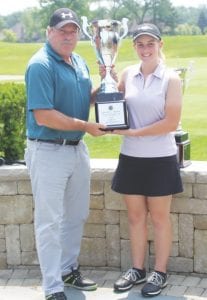 He toured the front nine in 2-overpar 38 and birdied Nos. 14 and 16 to get back to par. He said he didn’t know where he stood until he got to the last hole.

“I wasn’t sure until 18 when Alex came out and watched,” said Castanos. “That’s when I kind of knew he was the man in the house.”

Other golfers shooting in the 70s in the championship flight were Holly’s Mitch Hughes with 76, Swartz Creek’s Garrett Jewell and Grand Blanc’s Noah Troyer with 78, and Clio’s Brian Knack with 79.

Thomas is the second straight Flushing golfer to win the girls’ title, succeeding Raider teammate Kerri Parks. Starting on the back nine, Thomas birdied Nos. 11 and 1 and shook off a double-bogey on the last hole to beat Powers Catholic’s Reanna Barth by three strokes.

The Jack Nicklaus Group golfers now move on to Atlas Valley CC next Monday for the Henrickson Award, the last of the FJGA’s three majors. Still up for grabs are the season-ending tournaments Aug. 3-5, as well as the Braun Cup, which rewards the year’s most consistent golfers on a season-points basis.