Teammates face off in FJGA 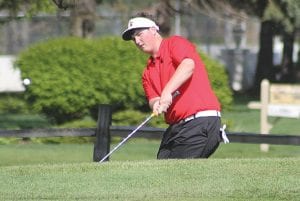 Thomas James and Connor Carey of Grand Blanc matched up in the boys’ championship flight, while Kristen Loiselle and Morgan Storer of Swartz Creek squared off in the girls’ first flight of the 18-hole Jack Nicklaus Group at Swartz Creek Golf Course. Those finals were played yesterday, after VIEW deadlines, so the results will be published next week.

James dominated two rounds of qualifying play Monday and Tuesday, shooting 2-over-par 71-75-146 to earn medalist honors. Carey was close behind at 75-73-148 to land his spot in the match-play final. No other golfers were closer than five strokes of the two Bobcats.

Loiselle earned the No. 1 seed in the girls’ flight with an 86 Monday, then beat No. 4 seed Brooke Thomas, 3- and-2, in Tuesday’s match play semifinals. Storer took the No. 2 seed with a 93 and routed Megan Pfarrer, 7-and-5, in the other semifinal.

The girls’ championship final matched Chloe Lawrie of Swartz Creek against Samantha Moss of Fenton. Lawrie was medalist in Monday’s qualifying with a 77, then beat No. 4 seed Caycee Turczyn of Lapeer West by default in Tuesday’s match play semifinals. Moss, the No. 3 seed, beat No. 2 Alicia Flood of Kearsley, 4-and-3.

Noah Rocheleau won the championship flight of the nine-hole Phil Mickelson Group, beating top-seeded Joe Montpas, 2-and-1, in the semifinals and Jason Raske, 3-and-1, in the final. Rocheleau, a freshman at Goodrich, was seeded fourth after shooting 40 in the qualifying round.