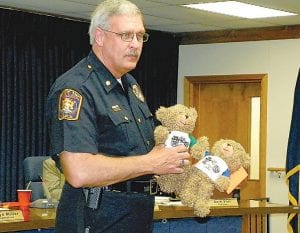 Lt. Tim Jones of the Flint Township Police Department holds teddy bears that police will use to calm frightened children at emergency events.

FLINT TWP. — Next time township police officers are in a stressful situation involving young children, they can offer comfort in the form of a teddy bear.

Twenty six stuffed toys were presented to the department last week by Jet Kilmer, president of the Grand Blanc Chamber of Commerce which spearheaded fundraiser to buy them.

The bears are useful when a child is involved in a traumatic experience such as ending up in the back of a police car or getting lost or being in the middle of a domestic dispute, Kilmer said, in presenting the bears to Lt. Tim Jones.

“The teddy bear seemed to be something that would give them a little bit of tranquility and kind of open up that line of communication with the officer to find out what exactly was going on,’’ she said of the nationwide Teddy Bear Patrol program that’s been in existence about 20 years.

Ten chambers of commerce collaborated locally on fundraising for the bear project. The Grand Blanc Chamber assumed an administrative role because somebody had to write the check for $6500 to buy the first 1,000 bears, Kilmer said.

“We actually had a lot of fun doing this,’’ she said.

The bears come with a card asking for brief information about who, when and why the bear was given away. The card information will be used by program administrators as a selling tool to get future sponsorships to continue the program, she said.

Meantime, if township officers run out of bears, more can be requested from Grand Blanc Police Chief David Stamm who keeps the reserves.