Benefit to give officers tool to help traumatized kids 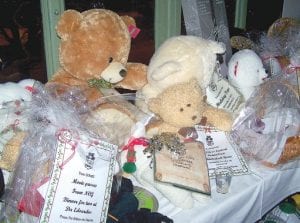 GENESEE COUNTY — Area law enforcement will soon receive a gift that keeps on giving in the form of comfort for children who have experienced a traumatic event.

The idea behind the program is to put new teddy bears in the police cars of Genesee County law enforcement, so authorities can distribute them to children they encounter who have been involved in some type of trauma like a car accident, house fire, a lost child or for domestic disputes.

At a recent fundraiser event put on by the chamber at Tavern on the Green, Jet Kilmer, president of the Grand Blanc Chamber of Commerce, said it took the group about four years to collect the $3,500 needed to purchase 500 bears to circulate to the police departments countywide. 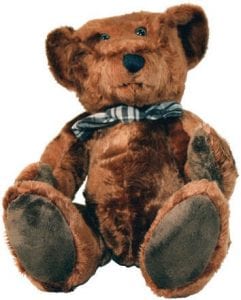 “We were looking for an event for the chamber,” she said, “not just a fundraiser but something for the good of the community.”

Dave Donahue, owner of Tavern on the Green, at Hammerberg Road and I-69, said raising the money for the bears was a major undertaking, but one he said will pay off in the end for everyone.

“It was a lot of work, but it definitely manifested itself,” he said. “Now here we’re going to end up with 500 bears for police in Genesee County.”

The bears will be distributed and any leftovers will be housed at the Grand Blanc Township Police Department, where police agencies can come get more as they are needed.

Flint Mayor Dayne Walling, who attended the Dec. 1 event, said he was pleased to see a fundraising benefit serving law enforcement like the Teddy Bear Patrol.

“We can’t do enough to support our police officers,” said Walling, “and to serve families and children.” 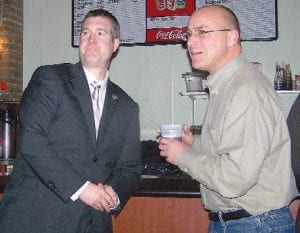 Flint Mayor Dayne Walling, left, talked to guests at the event and showed his support for the program.

Kilmer and Donahue expressed gratitude to everyone involved in raising money for the Teddy Bear Patrol, including committee members Brian Carr, Cheryl Sclater, Mark Lackey and Shelly Benjamin. She also extended a thank you to students at Woodland Park Academy in Grand Blanc who have helped with fundraising efforts.

Walling summed up the meaning behind the Teddy Bear Patrol and the efforts of everyone involved in the project: “A small act of kindness goes a long way in a tough situation.” 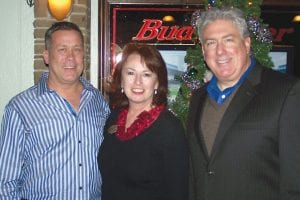