Teen golfer looking forward to playing in tournament at Augusta 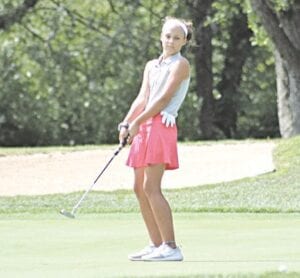 GRAND BLANC — A Grand Blanc Township teen will fulfill one of her biggest dreams when she steps onto the lush, emerald grounds of Augusta National Golf Club.

Kate Brody is one of 80 young golfers from across the country to qualify for the 2021 Drive, Chip & Putt National Finals. The Golf Channel will broadcast the competition, which takes place April 4, the eve of the Masters Tournament.

The teen has a 1.4 handicap and an 18-hole low score of 67, which she tallied twice: once at Hartland Glen Golf Course in Hartland when she was 15 years old, and again the following year at the Fortress Golf Course in Frankenmuth. Brody also holds a PGA Jr. League title.

“It’s such an honor,” Brody said of the opportunity to play at Augusta. “It’s going to be such a great experience and I’m really excited for it to happen.

“It’s definitely going to be nerve-wracking. It’s one of the most well-known and famous courses in the country and there are going to be a lot of people watching. But it’s going to be the experience of a lifetime.”

Brody credits her parents for allowing her the freedom to develop her game in a way that best suits her.

“They are very supportive,” she said. “I’m lucky to have such great parents. I know a lot of parents can put a lot of pressure on their kids. Everything in my golf game has been self-driven, and they’ve supported me along the way and given me opportunities. But they let me take the reins.

“It has made me work harder and have a better work ethic. I love to play. They never force me. They never tell me to go practice, or play this tournament. It’s all me. It’s what I want. I think that’s important.”

Brody said she loves the sport; she loves to practice, play and participate in tournaments.

“I never get bored of it,” she said. “I have made so many friends and developed so many great relationships. I’ve really met some great people, which is one of my favorite parts of it.”

Playing at Augusta has been one of Brody’s dreams. She also hopes to play at Pebble Beach Golf Links in California, and anywhere in Scotland or Ireland.

Her goal is to earn a college scholarship for golf and ultimately play professionally.

When asked what it takes to be successful in her athletic pursuits, Brody said, “keep having love for the game, be self-driven, work hard.”

“If I keep working hard and doing what I’m doing now, anything is possible,” she said.

In addition to her parents, Brody’s support network includes her brother, Tyler, who celebrates his 14th birthday the day of Augusta.