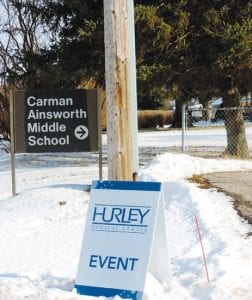 About four Hurley Children’s Hospital Teen Health Checks are held each year at various sites around the county, to screen for a heart condition that can be fatal to student athletes. Carman-Ainsworth Middle School was the host site last Saturday.

FLINT TWP. — Only two heart abnormalities were detected among about 200 young people who attended a Hurley Children’s Hospital Teen Health Check on Saturday at Carman- Ainsworth Middle School. Even better news was no evidence of hypertrophic cardiomyopathy, one of the leading causes of sudden death in young athletes.

The free health screenings are held periodically at various locations throughout the county open to athletes and other young people involved in physical activity or exercise.

Swartz Creek, Flushing and Goodrich all have had instances of young people who died or suffered from this undetected heart conditions, said Dr. Jim Weber, a Hurley ER physician who was among about 50 Hurley volunteers conducting the screenings.

“Any time a child dies, it is catastrophic but in this case it is typically healthy kids with no underlying medical problems who die suddenly,” Weber said.

Other recent Michigan cases included a hockey player in Grandville, a basketball player in Fennville and a swimmer in Troy 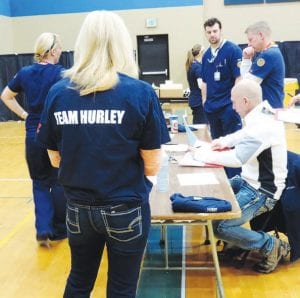 Dr. Jim Weber (seated) was among about 50 Hurley volunteers who conducted the free teen health screenings. Right, Phillip Woodbury, 11, of Swartz Creek gets an electrocardiogram to check the electrical activity of his heart during a Teen Health Check screening at CAMS last weekend.

Teen Health Checks are co-sponsored by the Thomas Smith Foundation, created in memory of Thomas N. Smith, 17, a Flushing High School senior, who passed away in January, 2011 from an undiagnosed, enlarged heart.

The Smith Foundation also gets support from the parents of a Goodrich solder, 21, who died suddenly during boot camp from an undetected hear condition.

A Swartz Creek student, who collapsed in full cardiac arrest during a gym session in October 2011, is among the few lucky enough to survive.

“We are drawing attention to the problem,’’ Weber said “It is one of those high publicity problems when it happens, parents feel anxious for good reason.”

Phillip Woodbury, 11, of Swartz Creek came to the screening at his mother’s urging.

“My mom was concerned because of all the young people she sees on TV falling over and dying from exercise,’’ said Phillip, a youth football player. 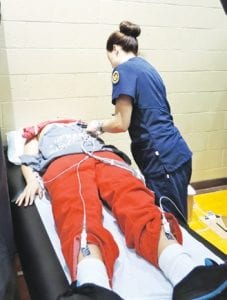 He felt perfectly healthy but like the rest of teens attending the screening underwent the 30-minute testing that included a medical history, blood pressure check and an electrocardiogram. Echocardiograms, a more in-depth heart test, also were provided on site, as needed.

“This is not something that is part of a routine history and physical exam,” Weber said. “It is not traditionally covered by third parties.”

The testing costs about $2,000 per person, which is why providing it for free is a community service, he said.

This screening program was first developed at Beaumont Hospital in Detroit in 2007 with the intention of identifying high school age students who might be at risk for sudden cardiac arrest and other cardiovascular complications. To date more than 7,000 teens have been screened in Michigan.

A fairly healthy group attended Saturday’s screening, Weber said. Most were active in at least one sport but there were non-athletes as well.

Typically about 20 percent of those at a screening event are sent for further testing with an echocardiogram.

“We picked up a couple of abnormalities that will need to be followed up by a pediatric cardiologist,’’ Weber said. They were problems that could become serious, if not addressed.

No indication of hypertrophic cardiomyopathy was detected but it is more common than people think, Weber said. It is a genetic condition, meaning it runs in families, and occurs without warning in a child with no symptoms of heart trouble.

When detected at screenings, the entire family is screened also, Weber said.

Hurley conducts the free teen screenings about four times a year. The next one will likely be held either in May or September,