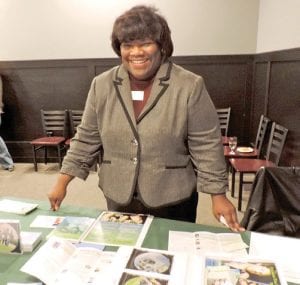 FLINT TWP. — For young people who think about ending their lives, there is help and hope. That was the urgent message Valerie Southall of Flint, brought to a suicide prevention event held last week at Beef & Barley on Linden Road.

Southall is the community liaison for Stonecrest Center, an impatient mental health and substance abuse treatment center in Detroit. A strolling reception Southall hosted was the first of many ongoing efforts to spread the word about free suicide prevention materials available from the Jason Foundation Inc., a Tennessee-based suicide prevention educational and awareness program, named by founder and president Clark Flatt for his son Jason who committed suicide in 1997 at age 16.

Southall called suicide a silent epidemic because it happens more frequently than the public may be aware of.

“We lose 100 young people a week in the United States to suicide,” she said. “Eighty percent of those deaths could have been prevented if people knew what to look for. So we are trying to get the information out to the public so they will know what to look for,’’ she said.

Stonecrest is an affiliate of Arcadia Health Care, which has formed a national partnership with the Jason Foundation.

Southall stressed that valuable materials offered by the Jason Foundation is currently free. As Stonecrest’s outreach coordinator, Southall is on a mission to get those materials into the hands of teachers, youth group leaders, religious organizations, pediatricians and others “on the front lines” of working with young people.

In Michigan, 16 percent of youths surveyed in 2013 said they had considered suicide in the past 12 months, which equates to about 117,836 young people in the state, according to Statistics from the Youth Behavioral Survey, conducted by the Center for Disease Control. The state percentage of affirmative responses is lower than the national percentage of 17 percent, Southall said.

But a more alarming statistic is that 8.9 percent, about 64,546, said they had attempted suicide in the past year, which is higher than the national rate of 8 percent. That projects an average of 180 attempted teen suicides a day in Michigan – or one out of every 11 youth.

Southall also noted survey findings that 14.7 percent of Michigan teens said they had planned a suicide in the past year, which also is higher than the 13.6 percent national rate.

Southall added that some teen suicides go unreported because they are mislabeled as a car accident or other mishap. The survey also reported that 27 percent of Michigan youth responded that they have experienced long periods of feeling hopelessness and sadness, a possible beginning of clinical depression.

While it is a widely believed myth that most suicides occur during the Thanksgiving-Christmas holiday season, according to the Center for Disease Control, what is actually true is that suicide is a year-round major public health issue that claims more than 36,000 lives each year. More than 374,000 others end up in emergency treatment centers with self-inflicted injuries, the CDC reported.

“There are no youth beds for mental illness in Genesee County,’’ Southall said, adding that many of Southcrest’s referrals come from Genesee County hospitals.

Southall conducts train the trainer and professional development workshops for teachers. At the reception, she displayed an assortment of available training materials including informational brochures, videos and a full curriculum called “A Promise for Tomorrow: A Youth Curriculum Unit for the Awareness and Prevention of Youth Suicide,’’ offered for free by the Jason Foundation.

For more information, email Southall at valerie.southall@arcadiahealthcare.com or call 810-347-8124.

More information about Stonecrest Center is available online at www.stonecrestcenter.com/

The Jason Foundation has a web site at jasonfoundation.com/