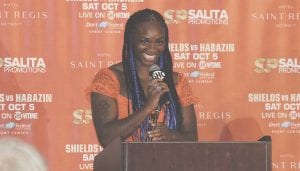 Flint’s pro boxer Claressa Shields smiles as she steps to the podium during Wednesday’s press conference at the Dort Federal Event Center. Photo by Brandon Pope

FLINT – Excitement was in the air in the lobby of the Dort Federal Event Center on Wednesday morning. Friends, family, fans, and several media members, were glued to every moment, as pro boxer and Flint native Claressa Shields was announced to be fighting Ivana Habazin on Oct. 5 at Dort Federal. The event will be televised live on Showtime at 9 p.m.

Everyone was in awe on Shields’ side of the table, as a pile of championship belts sat in front of her, so many in fact that she couldn’t pose holding all of them at once. Shields is aiming to become the fastest boxer ever to hold belts in three different weight classes, and a win over Habazin would accomplish just that.

“It’s been two and a half years now and all I ever wanted to do was come back home and fight,” said Shields. “I haven’t fought here since I was an amateur,

I believe I was 18, and I knocked a girl down at the Kettering Event Center. Some of you were there.”

Shields (9-0, 2 KOs) and Habazin (20-3, 7 KOs) will be competing for the currently vacant WBO Junior Middleweight Title. The fight was previously scheduled to take place in September, but an injury to Shields set the fight back. Shields spoke about what she was up to during her recovery.

“In July, I ended up getting injured – I dislocated my knee, and that gave me six more weeks to spend with the kids,” added Sheilds. “They taught me so much and they made me stronger. Now those same kids can see me fight in person. They touched me; they taught me a lot. Now, I’m not just Claressa Shields, but Claressa Shields is now their friend.”

As usual at any boxing or MMA presser, tempers began to rise to the surface. Habazin and her trainer, as many fighters have in the past, made comments that seemed as if Shields was being taken a bit lightly. She didn’t take to kindly to those remarks.

“Ivana, you are crazy – you and your coach,” retorted Shields. “I’m ready to go right now; right now. All of these girls, when they come from overseas, they just come over with the wrong attitude. I understand the attitude of wanting to win, but don’t come like it’s a walk in the park. I’m definitely not a walk in the park. “

It was obvious post press conference that the trash talk would continue, but Shields seemed very determined, as is always her demeanor. And she made her intentions very well known.

Tickets are available at Ticketmaster.com or at the Dort Federal Event Center box office.