Henna tattooing on display at the Genesee District Library 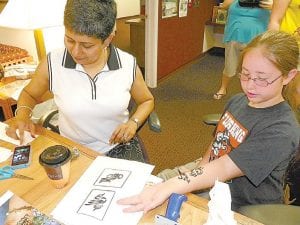 FLINT TWP. —Billed as an opportunity to create a temporary tattoo that can last up to two weeks, a free lesson on

“Henna’’ drew 33 women and teens Tuesday to the Genesee

Valley Mall branch of the

Anshu Varma of Okemos demonstrated the art of meh’ndi, which she described as temporary body art from India, and also gave a quickie course on

Indian culture including how to tie a sari.

She created the technique because so many of her teenage daughter’s friends were asking her for designs she thought it would be better if they learned to do it themselves.

Now she travels statewide teaching her meh’ndi method at schools and libraries.

It definitely appeals to teens. 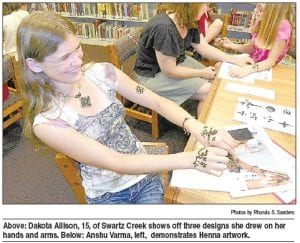 High School, came to the demonstration because she saw one while traveling in Delaware and wanted to learn how to do it.

Phillips not only decorated her ankle with an oriental symbol but gave a helping hand to a stranger, Natasha Barfield of

Flint Township. Phillips did a freehand drawing of a sun to cover a scar on Barfield’s arm.

“It was really fun to design it and to see it come to life ,’’

Phillips said of her handiwork.

Dakota Allison, 15, a student at Swartz Creek Middle School, also came because she thought it sounded like something cool to do. She did three designs on her hand and arm – an Om symbol, a fleur de lis and a doodle.

Varma gave her group special instructions on preserving their body art. They were told not to wash their hands or wherever they had placed the design for 24 hours. The longer it sets the longer it lasts, she said.

Varma also used six yards of elaborate red and gold fabric to demonstrate how to wrap and tie a sari, the traditional Indian dress.

Asked if it had religious significance, Varma said it is like a Japanese kimono that anyone can wear. An average Indian woman’s wardrobe might contain 300 saris, she said.