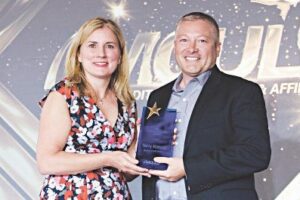 This award recognizes his leadership within the credit union, and his contributions to the industry as a whole.

He was awarded this honor at the MCUL’s Annual Convention & Exposition on Aug. 24. This prestigious award is given to one credit union professional each year.

Katzur has served ELGA Credit Union since 1996, when he began his career as a co-op student. “Terry is a kind and considerate leader who is well respected, trusted and loved at ELGA Credit Union,” said Karen Church, ELGA CEO. “His leadership has always guided our associates, and over the past year it has been invaluable in ensuring our associates and members have felt safe and connected. He is very deserving of the Professional of the Year award.”

“It is an honor to be recognized by the industry that I’ve dedicated my career to and that does so much for the communities and members that credit unions serve,” said Katzur. “Especially as I look forward to the future of my career, this award means a lot.”

After more than 25 years with ELGA Credit Union, Katzur prepares to shift his role in 2022, when he will be named Chief Executive Officer.