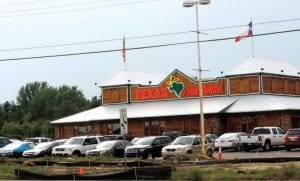 Vehicles filled the parking lot to overflowing for the Monday opening of Texas Roadhouse on Miller Road.

FLINT TWP. — Judging by the overflow of vehicles in the parking lot Monday evening, the new Texas Roadhouse restaurant, 4140 Miller Road, is going to be a hot spot.

Plans were announced in July 2014 to build the 7,162 square-foot steakhouse on the site of a former car dealership. DA Real Estate Group of Southfield are the developers for it and an adjacent 6,800 square-foot strip that still in under construction.

After razing two former dealership buildings on the site, construction began in March of this year.

Texas Roadhouse brought in about 200 jobs – 60 percent part-time and 40 percent full-time, according to Travis Doster, Senior Director of Public Relations for the Kentucky-based company.

They are still hiring, according to 9 job postings on the company website that include hosts, prep cooks, servers, bakers, broil cooks, line cooks and meat cutters.

Texas Roadhouse is known for its “hand-cut steaks, fall off the bone ribs, fresh baked rolls and ice cold beer.” It has a Western-themed décor but the walls of each Roadhouse have a mural created specifically for it, to reflect the local community.

Founded in 1993, the chain currently operates 430 locations in 49 states and five international locations, according to a Fact Sheet on corporate website.

Texas Roadhouse serves dinner-only during the week but is open for lunch on weekends. The restaurant offers take-out service and call-ahead seating times.