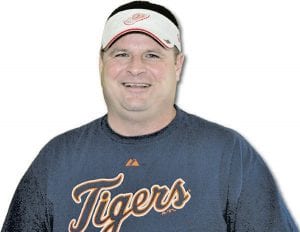 The Olympics have the USA winning numerous gold medals, which is no shocker. The Michael Phelps story has been the most interesting watch in Rio, for me anyway. Phelps has won six medals of which five are gold and one silver.

One must ask, is Phelps the most decorated Olympic athlete ever? I would have to answer yes, I do believe he is. What he has accomplished in the pool is remarkable and captivating to me. He never seems to disappoint the fans watching the Olympics. He stares down all his opponents and then goes out and gets the job done. I would like to say, thank you, Mr. Phelps. You have made my 2016 Olympics worth the watch.

One more thing I want to acknowledge is the swimming of Katie Ledecky! She has won four gold medals and one silver at these Olympics and she has captivated the Fat Guy with her swimming, too.

I want to switch over to gymnastics and say what a treat it is to watch Simon Biles. She is one awesome gymnast! The mistake on the balance beam cost her a record-tying fourth gold medal and that was a shame. I know there are numerous worthy Olympians and I salute all of them, but the three previously mentioned were my favorites. I can also state I have not watched many other events. I did watch Usain Bolt win the 100 meter, though! He is something else speed-wise! An absolute total blur!

The NFL preseason schedule is over for week one. It was about as exciting as watching the grass grow. I did like seeing the 89,000 people in the stadium to watch football in L.A.! Yes, the Los Angeles Rams are back! However, there is no Jim Evert or Eric Dickerson on this Rams’ roster. The heralded rookie, Jared Goff, made his NFL debut. It just seems normal to have the Rams back in L.A.

The Detroit Lions traveled to Pittsburgh for the preseason opener. The Lions came out on top 30-17. Matt Stafford played one series and that was it. He did hit newly-acquired Anquan Boldin for a 30-yard strike, which was a nice hook up. I thought Jake Rudock looked decent going 8-for-11 for 72 yards and a touchdown pass. It’s so hard to know how good the performance is, though, as he was playing against all of Pittsburgh’s backups. He didn’t look intimidated, though, which was a good thing.

The first round pick, Taylor Decker, was abused by Pittsburgh’s James Harrison the old wiley veteran defensive player. The rook shouldn’t feel too bad, Harrison has destroyed many offensive tackles during his long NFL career. It had to be a good learning experience for Decker. Hey, Taylor, this ain’t Ohio State anymore; this is the big show! I look for an improved Taylor Decker this week against the Cincinnati Bengals. The Lions will be at Ford Field tonight and game time is at 7:30 p.m. The opponent will be the Cincinnati Bengals, or the crazy helmets, as I call them. It will not be a packed house!

The Tigers had a tough trip out to the Left Coast in Seattle losing a threegame series. They did bounce back in Texas winning two of three games. The Tigers open a huge home stand with three games against the Kansas City Royals who have fallen on tough times this baseball season. The next four games will bring in the BoSox of Boston for a four-game series. The Tigs and Sox are fighting each other for a wildcard spot, so these games are huge to both teams. I expect Comerica Park to be jammed park for all four games and the ball park to be filled with playoff type atmosphere baseball. The Fat Guy will be attending the Friday night game in Motown and I am all jacked up for that baseball game and some barley pops. The Tigers still trail Cleveland by 4.5 games after cutting it to just two games last week. The American League Central Division is still within reach for the Kitty Cats.

I will be setting up a Beat the Fat Guy picking against the spread this year. If you finish ahead of me in the standings, you will be in a drawing to win a sweet prize. The details will be in next week’s paper and I will give details every week how to enter leading up to the NFL ‘s first game. thefatguy@mihomepaper.com