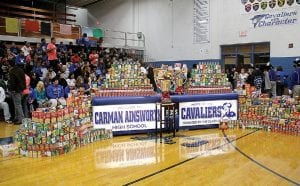 C-A students, staff and supporters piled up a mountain of donations for the Food Bank of Eastern Michigan, shown here during a Spirit Cup pep rally last Friday. Inset, a closer look at the coveted Spirit Cup.

FLINT TWP. — Parents having trouble getting teens out of bed to get to school on time might want to try dangling different bait.

Spirit Cup is a year-long competition organized by WJRT- TV 12 that is presented to the high school that donates the most pounds of canned foods and non-perishable items to the Food Bank of Eastern Michigan, according to Dave Swierpel, C-A, director of community education.

Every Friday during the school year, an ABC12 Spirit Squad visits a Mid- Michigan high school for a pre-dawn pep rally that is broadcast live during an early morning news show.

At the end of they year, the school donating the most food wins the ABC12 Spirit Cup which they get to keep for one year.

Carman-Ainsworth won the title for 2009-2010 and is out to recapture the trophy this year which currently in the possession of Flushing High School, last year’s winner. 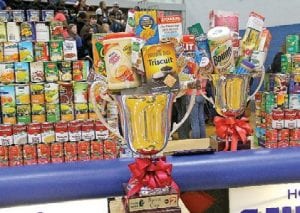 C-A will be organizing other events and fundraisers throughout the year., spearheaded by Angela Middleton and Cindy Gunn, CAHS teachers, Swierpel said.

People from around the community help by donating food and cash which all goes to the Food Bank of Eastern Michigan. Every dollar donated counts as nine pounds of food.

A few sleepy eyes were spotted in the crowd at Friday’s pep rally at C-A but it was a high-energy event with cheerleaders, bands playing, dancing an even a handstand by Tom Klee, a business education teacher who also is well-known as a spirited announcer at C-A athletic games.

C-A’s Student Council leaders and Empathy for All groups were singled out for recognition in the crowd. 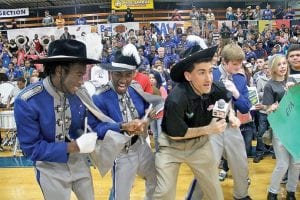 CA rocks with a reporter from TV 12 during a Spirit Cup pep rally last Friday.

The student body also was revving up to cheer on its football team which went on to topple its opponent in a regional playoff game on Saturday.

So far this year, students across Mid- Michigan have helped ABC12 collect more than 700,000 pounds of food that the Food Bank used to help people in 22 counties, Swierpel said. 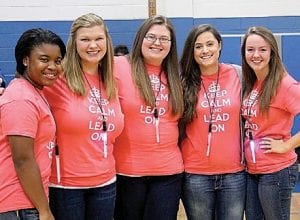