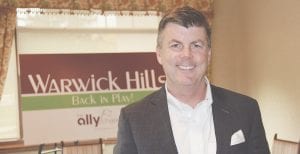 Tournament Director Chris Coffman says this year’s inaugural Ally Challenge was a huge success, bringing thousands of spectators and hundreds of volunteers, along with a significant economic impact to Genesee County. Next year’s Ally Challenge dates have been announced as Sept. 9-15, 2019. Photo by Alex Petrie

GRAND BLANC — Tournament Officials today announced the dates for the second annual The Ally Challenge presented by McLaren. Warwick Hills Golf and Country Club will once again play host to an elite field of 78 PGA TOUR Champions professionals Sept. 9-15 for the 2019 tournament.

“The first Ally Challenge was by all measures a great success and we can’t wait to repeat that success next year,” said Andrea Brimmer, chief marketing and public relations officer, Ally. “We were so gratified to see the pride and the turn out from the community. We look forward to being back next September at Warwick Hills where the members and staff did such an unbelievable job hosting us.”

This year’s inaugural edition of The Ally Challenge presented by McLaren concluded Sept. 16 at Warwick Hills and provided a first-class experience for players and spectators alike. Paul Broadhurst emerged from a star-studded leaderboard to claim his fifth PGA TOUR Champions title and hoist The Ally Challenge trophy as the tournament’s first champion.

The charitable impact of the 2018 Ally Challenge will be announced in the coming weeks, including dollars raised for the tournament’s primary beneficiaries, Junior Achievement of Southeastern Michigan and Community Foundation of Greater Flint.

“What an amazing week at Warwick Hills celebrating the inaugural Ally Challenge presented by McLaren,” said Tournament Director Chris Coffman. “We certainly have a solid foundation to build on… from the wonderful crowds filled with tremendous golf fans, to one of the best fields on the PGA TOUR Champions, to our dedicated group of more than 900 volunteers, to the best host site on Tour, to Ally and McLaren and all of our sponsors… we are most excitedly looking forward to 2019 and beyond.”

For more information about The Ally Challenge, please visit www.theallychallenge.com. For the latest Ally Challenge news and updates on social media follow the tournament on Twitter and Instagram at @AllyChallenge and on Facebook at Facebook.com/AllyChallenge.