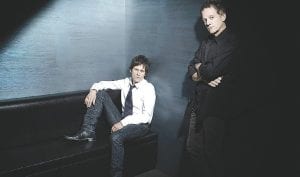 Their innate passion for the industry has transcended far beyond their imaginations as the duo, simply known as The Bacon Brothers, have released six studio albums and have traveled the world to hundreds of venues captivating their audiences with their music at each stop.

Their latest adventure brings them to Flint, a city they share a special connection with, to kickoff the Whiting’s 2011-12 season with a gritty rock ‘n’ roll performance with a hint of their hometown Philadelphia soul on Oct. 14.

“Flint is where our parents meet and fell in love so we’ve heard so much about it all our lives,” Michael said of their late parents. “I’m really curious. If we didn’t have a gig in Flint I may have never gotten here.”

The Bacon Brothers first got their start 16 years ago as a stripped down band lacking a drum kit and electric guitars after Kevin’s friend, who had heard various demos Kevin and Michael recorded, approached him seeking to book The Bacon Brothers for a show he was managing in Philadelphia.

“I never in a million years thought I would still be doing this,” Kevin said, who at a young age idolized his older brother Michael and his band, tagging along to their gigs at the Philadelphia famed, Electric Factory. “We really put it together for one show.”

Michael, having moved on to composing for film and television, said he was ambivalent about getting back into performing, but did not want to pass up an opportunity to work with his brother.

“I had sort of given that up, but I always loved playing with my brother,” Michael said. “I thought it was just one job, kind of a goof to see if Kevin liked it and I think he was kind of surprised, first of all, that we wasn’t to bad and also that he really enjoyed it. It was a good challenge and my brother is a man who loves to challenge himself.”

Despite thinking their first show would be their last, Kevin said there was never a moment when he did not take The Bacon Brothers seriously.

“People would say, ‘oh you do it just for fun’ That is not how I approach the things I care about,” Kevin said. “For fun, I go on a hike with my dog. Recording and performing, it’s all fun but that was not my initial intent.”

Much of the skepticism Kevin received was from critics questioning his ability to step-out from his established career as a well-known actor and move in the direction of a musical performer.

With no plans of quitting acting or music, Kevin kept moving forward never letting the critics bog him down. In some respect even, Kevin said he could relate to their thought process.

“If someone is predisposed to not like music because it is being played by an actor, it is tough to argue with that,” Kevin said. “Truth is, I am very skeptical of actors who want to play music, and it is terrible because I am one of them, but I think everyone has a ‘whoa, whoa, whoa, that is not right’ reaction to it. We just have to keep rolling along and trying to put on the best show we can.”

Michael said his brother has long since shed the image of a “wanna be” musician and has become known as a man who can both act and rock.

“We let music lead us where it will and it has been great so far,” Michael said. “I think it is the one place in both our lives that we don’t have to manipulate it to please anybody else.”

Despite Michael’s background in composing, most of their lyrics are written by Kevin and Michael said he attributes the bands evolution from a very raw band to a sonically main stream rock to Kevin’s songwriting.

Kevin however said he is simply indulging a passion and pulling inspiration from anywhere he can find it.

“Sometimes it is hard. You pick up a guitar in the corner and it is not talking to you,” Kevin said of composing. “If you keep your eyes open and you keep your heart open then those are the best kinds of songs. For me, it is always personal.”

Their latest album, New Year’s Day, is laced with personal experiences and is a true representation of a collaborative effort amongst the whole band.

“Three of our four guys in the band have been playing with us for years and we asked if they wanted a hand in producing the record,” Kevin said. “Each band member took a few songs and we all produced them in our home studios and interestingly enough, I think it ended up being our best record yet.”

Both Kevin and Michael said there will be a seventh album, but stated they need to come up with more songs before they can begin recording it. For right now though, they are content to just focus on their upcoming show at The Whiting and their Chicago appearances.

“Touring is not a vacation, but playing, actually getting there and counting off the first song is always great, even at its worst, it’s a fun thing to do,” Kevin said. “I really like that when you are playing a show there is something great about the fact that it is just going to be for one night and you have a special kind of relationship with the audience that will never be captured again in the same way.”