The Boys Aren’t Backing Down 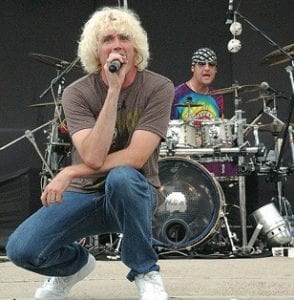 CHESANING — Lynyrd Skynyrd, Elton John, Twisted Sister, Jimi Hendrix, Huey Lewis & the News, ZZ Top and the Doobie Brothers are not expected to perform on Chesaning’s amphitheater stage in 2015. Their songs, and the songs of many other chart topping acts, will be parodied on that stage by that Christian parody band ApologetiX on July 17.

ApologetiX is from Pittsburgh, Penn. Five years ago, they were among the headliners performing on the Chesaning amphitheater stage.

The band has performed 1,500 concerts, across all 50 states. In March, ApologetiX celebrated its 23rd year and just released a new CD, Music is as Music Does. The group has released approximately 40 CDs in all and currently has more than 35 newly released singles available for donation at www.apologetix.com.

Friends of the Chesaning amphitheater are thrilled to welcome ApologetiX back to Chesaning for another great show on the amphitheater stage in Showboat Park, 800 S. Front St. Since the stage is an outdoor venue, special arrangements have been made with Trinity United Methodist Church of Chesaning as a backup location in case of inclement weather.

Tickets are $10 per person in advance or $15 at the gate. Youth age 5 and under are free. Tickets are available at the following locations: Tri-County Citizen newspaper in Chesaning, Simply Matted on Broad Street (M-13) in Bay City, Hemlock United Methodist Church in Hemlock, Noah’s Cove in the

The event website is nfcscgirl.wix.com/apologetix717 ; or visit Friends of the Chesaning

Amphitheater on Facebook for details about both the the Jake Slater tribute to Elvis on July 16, and the

ApologetiX concert on Friday, July 17. Note that the shows have different start times. The gates open at 7 p.m. for ApologetiX with the show starting at 7:30 p.m. Guests should arrive at least 15 – 30 minutes before the show. Wheelchair access is available at both upper and lower levels, watch for signs.

The ApologetiX concert is sponsored in part by the View Newspaper Group/ Tri-County Citizen and Mel Ervin Ford of Chesaning; as well as the Rock Lake Christian Assembly Youth Camp and Retreat Center of Vestaburg.