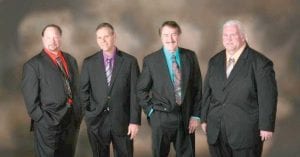 Present members of the 60-year-old Calvarymen Quartet are tuning up for their 60th anniversary concert. Tickets are now on sale.

FLINT TWP. — A historic evening of music and memories is in store at the Calvarymen Quartet 60th Anniversary Reunion Concert, 6 p.m., Saturday April 16 at the Central Church of the Nazarene, 1261 W. Bristol Road. Many former members dating all the way back to 1956 will be on hand for the special evening of celebration and song.

Tickets are $5 each and can be purchased on Sundays and Wednesdays in the church library or ordered online at www.calvarymen.com/60th-anniversary concert .

Since their birth in 1956, the Flintbased Calvarymen Quartet, has been a driving force in southern gospel music, according to a press release.

For 27 years, the Calvarymen represented Michigan on the main stage at the National Quartet Convention, which is home to the nations top names in southern gospel music.

In 1976, the Michigan State Senate declared by official resolution the Calvarymen Quartet to be “Michigan’s Ambassadors of Goodwill”.

Present day members include Barry Maust – Lead, Steve Ratliff – Baritone, Phil Parkin – Tenor, and back with the quartet, the original Bass singer, Jim Glasco. These ministers of music are regularly featured on the Gospel Music Television, as well as radio stations across the U.S. On the website “Radioactive airplay” which is a charting system for gospel music, the Calvarymen had the #1 Christmas song for 2006, and the #2 southern gospel song for the month of December, 2006.

They charted numerous songs nationally with the Singing News and other national charts throughout the country.