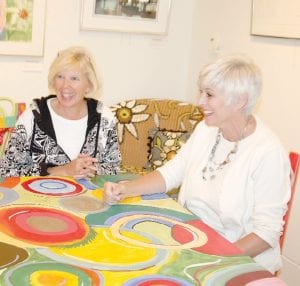 Jean Dundas, left, and Trish Zito- Smith, volunteers with The Chair Affair benefit for the Flint Institute of Arts.

FLINT — The Founders of the Flint Institute of Arts are currently holding their first Chair Affair, an online auction to benefit the museum.

Included in the auction are more than 50 chairs that have been handpainted by local artists, many of which were inspired by the masters.

Michael Melet painted three stools in the primary color-blocking style of Piet Mondrian. Of Melet, Founder Jean Dundas said “he has been a pillar of the institution.”

Dundas and fellow volunteer Trish Zito-Smith talked proudly of the vast array of influences the artists were inspired by.

Co-Vice President Zito-Smith, who is at the helm of the auction said, “I think everyone is having fun doing this.”

Many individual artists have submitted their work to benefit the museum, but Very Special Arts, an organization which gives unique opportunities to people with disabilities to make and display their creative potential, worked together on one of the chairs.

They created Orange You Excited About Art, a piece that shouts collaboration and personifies the word art.

“This chair won’t match your sofa” is written on the front of the upholstered piece and serves as an example of how furniture can transform into something more inspirational than functional.

Most in the collection would compliment traditional interior design, but with a twist. Zito-Smith who is a realtor and specializes in home staging, said Rki Petersen’s set of four lime and pink painted cane chairs, adorned with polka dot bows, would look “wonderful in a breakfast nook.”

Petersen offered many works, including two dining chairs called The Strawberry and The Cherry, painted and decorated in a retro style that would befit an Italian eatery or a funky home kitchen.

Items are coming in regularly. On Tuesday Dundas and Zito-Smith brought in a table and chair set, in the style of Russian Abstract painter Wassily Kandinsky, contributed by artist Elizabeth Weiss.

Zito-Smith said, “It is nice to see what you can do for the community by making art available.”

The Founders, volunteers who been an integral part of the FIA since 1959 are committed to preserving the community enriching spirit of the museum, which opened in 1928. They appreciate the place and importance of art in the history and revitalization of the city of Flint.

They value what aesthetics can contribute to culture, and how art can enliven the spirit of any and all who walk in the doors of the FIA.

“It is nice to see people exposed to different types of art,” said Zito- Smith.

Events like the Chair Affair, help keep admittance free to the public and the FIA operating.

Only special exhibits, like the current Andrew Wyeth one have an admittance fee, “and Target provides free Saturdays for those,” said Dundas.

“The best exhibit we ever had was Chihuly. It was mind-blowing,” said Zito Smith.

Zito-Smith said she and fellow Co- Vice President Petersen often reference classic cinema when they pursue a venture by saying, “Hey, let’s put on a show” and they do it with sheer passion.

They do it with exhibits and events like The Frost Festival in November and they are shooting for the Van Gogh stars with their latest, The Chair Affair.

The imaginative chairs, located all over the county including The Friends of the Perkins Library in Swartz Creek and Genesee Valley Center in Flint, will be on display until August, when the final bids are accounted for.

Artist Thomas Calhoun designed a six-foot-tall creation called The Weather Ball Chair, as an ode to the historic downtown staple. The nostalgic offering is currently on display in the lobby of the current Citizen’s Bank on Saginaw Street.

Anyone interested in checking out the pieces in the collection, and finding locations in Genesee County where they are temporarily available for viewing, can access the online bidding site at biddingforgood.com/thechairaffair.