THE END IS NEAR 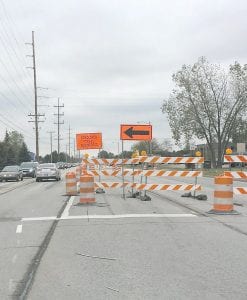 THE END IS NEAR — The Genesee County Road Commission has begun the fourth and next to final stage of Linden Road reconstruction, a nearly $5 million project that began in April. Stages One and Two focused on Linden Road north of Corunna Road, starting on the west lanes then switching to east lanes. South of Corunna Road. Stage 3 on the west side of the street began in mid-August. Traffic shifted to the east side of the road on October 4 to make way for the start of Stage 4 which is targeted for completion on or before November 15. One lane of traffic will be maintained in each direction of travel. The fifth and final stage will involve restoring vegetation, pavement markings and placement of permanent signage. Motorists are asked to be patient and allow additional time to navigate within the vicinity of the project.