The Flying Karamazov Brothers to perform at The Whiting 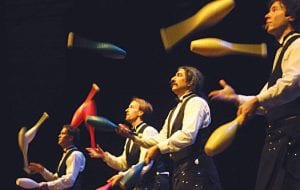 The Flying Karamazov Brothers demonstrate their juggling ability during a show. They will bring their show to The Whiting, April 20.

FLINT — The internationally acclaimed quartet, The Flying Karamazov Brothers, brings its vaudevillian comedy-and-juggling spectacle 4 PLAY to Flint for a not-to-bemissed performance April 20 at 7:30 p.m. at The Whiting.

Tickets are on sale and can be purchased online at TheWhiting.com, by phone at 810-237-7333 or 888-8-CENTER or by walk-up at The Whiting Ticket Center. For more information go to www.fkb.com or www.TheWhiting.com.

The Whiting is located at 1241 E. Kearsley St. in Flint, just off I-475 between the University of Michigan Flint and Mott Community College on the Flint Cultural Center campus.

Expect the unexpected with The Flying Karamazov Brothers in 4 PLAY, described as ‘multi-faceted new-vaudevillians at the apex of their ambidextrous and alliterative ability.’ The self-proclaimed eccentric lunaticsspice things up with a zany showcase filled with laugh-out-loud comedy, wild theatrics, arcane errata, and astonishing juggling feats. 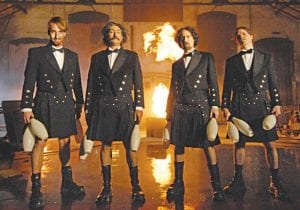 The Flying Karamazov Brothers with bowling pins used in their juggling act.

Formed at UC Santa Cruz in 1973, The Flying Karamazov Brothers have been seen around the world, on Broadway, on television and on the big screen.

They are not however, your father’s wildhaired, flame-throwing, juggling, kilt-andtutu wearing performers. They are beloved by adults, students, students who watch Glee, tourists, theatergoers, theatreavoiders, pseudo-intellectuals, Abe Vigoda, friendless geeks, hedge fund managers, hedge fund managers who are now Duane Reade assistant managers, kids (but only gifted ones with a solid background in the classics), disgraced religious leaders, Kardashians, and politicians. Pardoned? Incarcerated? They don’t discriminate.

The book 4 PLAY was written by Paul Magid and The Flying Karamazov Brothers, Susan Hilferty serves as costume designer, David Hutson as lghting designer, Rod Kimball is the juggling czar. Mark Ettinger is the music director, and along with Doug Elkins, Doug Wieselman and Howard Patterson provided the original music, while Stephen Bent serves as assistant music director. 4 PLAY is produced and directed by Paul Magid.

The Flying Karamazov Brothers’ wild and physically demanding antics won the ensemble a 1981 Obie Award for ‘Outstanding Achievement in the Off- Broadway and Off-Off Broadway Theatre’ and a 2004 ‘Award of Excellence’ from the International Jugglers’ Association.

The Flying Karamazov Brothers will perform April 20 at 7:30 p.m., for one show only at THE WHITING. Tickets are available online at TheWhiting.com, by phone at 810-237-7333 or 888-8-CENTER or by walk-up at The Whiting Ticket Center. For further information go to www.fkb.com or www.TheWhiting.com.