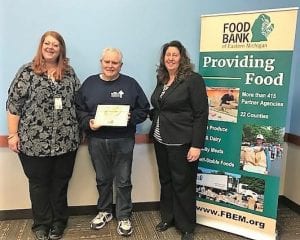 FLINT — The Food Bank of Eastern Michigan presented awards to volunteers, individual donors, companies, and other partners for their support in 2018 during the annual Partner Recognition Luncheon on March 26.

Kara Ross, President and CEO of the Food Bank, highlighted the many partners who made the 2018 Holiday Campaign a success. This year’s campaign had more than 150 activities, events, and food drives and raised $730,000 and 52,000 pounds of food, which gave the Food Bank the ability to provide 4.4 million meals through our partner agencies. Major partners this year included Biggby Coffee, the Flint Firebirds, Kroger, MLive, Outfront Media, The State Bank, Security Federal Credit Union, Financial Plus Credit Union, Genisys Credit Union, Skaff Furniture, and VG’s.

“Each of these groups and individuals have in their own ways made a significant impact on the mission of the Food Bank,” Ross said. “We rely on the continued generous support of our partners to continue fighting to end hunger in the 22 counties we serve in Michigan.” — G.G.