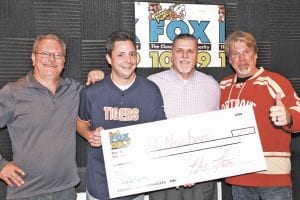 From left, 103.9 The Fox employees including Scott Mansell, Jeremy Fenech, Bill Bailey and Roy Moore will all be on hand tomorrow, Friday, Dec. 2 for their second annual Santa- Fox Radio-thon, which pairs the station with the Old Newsboys of Flint in order to raise money for the Old Newsboys’ Christmas Box Program.

FLINT – Over the past 92 years, the Old Newsboys have brightened Christmas morning for more than 800,000 needy children across Genesee County, and for the second year in a row, they’ll be getting a little help from their friends at 103.9 The Fox.

The partnership between the organizations began when Flint Township enacted an ordinance that would prohibit the Old Newsboys from continuing their annual tradition of selling newspapers around Genesee County to raise money for clothes, toys and hygienic products for children in the area. Turning to their friends at the Fox, the pair created the Santa-Fox Radio-thon last year and raised more than $15,000, which goes to the Old Newsboys Christmas Box Program.

“We here at the Fox have always supported the Old Newsboys,” said General Manager Bill Bailey. “Whether it’s their golf outing or various fundraisers they do throughout the year, we do whatever we can to help. And with the Santa-Fox Radio-thon, it turned out pretty great, so we made it an annual event.”

“And unlike a lot of radiothons I’ve heard, we’re still playing music throughout,” explained Program Director and Afternoon Host Jeremy Fenech. “We’ll be talking about the impact of the Old Newsboys and what they do, but we also stay true to the classic rock brand. And I think that’s the key to a successful radiothon is getting the message out and doing something positive while not alienating any listeners. Other than the music, for the most part, we kind of turn everything over to the Old Newsboys and the station is theirs for 12 hours.”

This year’s Santa-Fox Radio-thon will take place from 7 a.m. until 7 p.m. tomorrow, Dec. 2, when the Old Newsboys will flood the station and set up shop. Listeners will hear testimonials and stories about the Old Newsboys and what their organization has done to help the youth of Genesee County over the past century. The public is free to call and donate or to stop by the station and donate.

“Literally $20 is all it takes to change one kid’s whole Christmas,” said Bailey. “And we waste $20 almost every day on who knows what. This is a great cause and helps the kids around here have a better holiday.”

For more information about the Old Newsboys, the Santa-Fox Radio-thon or 103.9 The Fox, visit www.onbflint.org.