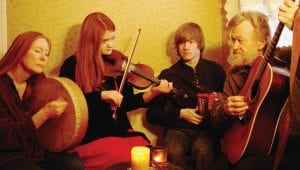 GENESEE TWP. — The Genesee County Parks has announced the fourth season of The Huckleberry Radio Hour, an old-time radio show broadcast live on 1470AM-WFNT from the historic Colwell Opera House at Crossroads Village.

July 16 will feature a Flint-area favorite — singer/songwriter/humorist Dan Hall. On Nov. 26, the show will be part of the opening of the annual month-long celebration Christmas at Crossroads Holiday Magic, and will feature the popular Irish folk band Finvarra’s Wren.

The Huckleberry Radio Hour also features its own soap opera, As the Village Turns, a village history lesson presented by the program’s schoolmarm, plus sto- rytelling, humorous skits with village characters, and some of Michigan’s best musicians. The sound effects, added in the tradition of old-time radio, are made by local actor and director, Jon Coggins. 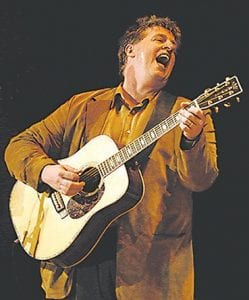 Michigan’s versatile troubadour, Neil Woodward, pairs with keyboard and bass player Gary Weisenberg to form the Huckleberry Pickers, who perform at each show.

The Huckleberry Radio Hour also spotlights the remarkable four-part harmonies of the Flint Institute of Music’s Flint Jubilee Quartet, under the direction of Sylvia Pittman.

The Huckleberry Radio Hour begins with a pre-show at 6:30 p.m. when the opera house audience members learn how they can participate and make the “live” audience lively. The show starts at 7 p.m.

“When you think of the Huckleberry Radio Hour, think of those classic radio shows such as the Grand Ole Opry, the Jack Benny Program, and A Prairie Home Companion,” says Thorp. “The fun difference is that this show is all about Michigan.”

For tickets to be in the opera house audience go to www.geneseecountyparks.org. — G.G.

Claudia Schmidt appears for the first time at the Colwell Opera House. She has been performing for almost four decades and describes her show as, “…a quirky and wonderful hodgepodge of music, poetry, story, laughter, drama, and celebrating the moment.” She is an accomplished 12-string guitar performer and can hammer a mountain dulcimer into submission.

The San Francisco Bay Guardian said, “Schmidt’s shows are a lot like falling in love. You never know what’s going to happen next, chances are it’s going to be wonderful.”

Singer and songwriter, Dan Hall, returns to the Huckleberry Radio Hour on July 16. This Flintnative has been performing since he was 10. He is a former director of music at the Cross in the Woods, one of Michigan’s best known tourist destinations.

Hall created the theme music for the PBS television show The Northern Experience, an award-winning music video, and for 1937 which tells the story of the sit-down strike of 1936-37. He wrote and performed soundtracks for The Great Storm of 1913 and for Expedition ’94, a documentary about the illfated ship, the Edmund Fitzgerald.

Their musical arrangements include Appalachian dulcimer, bodhran and guitar as well as traditional fiddle, whistles and box.

The Detroit Metro Times wrote that Finvarra’s Wren is, “…. making the kind of music you’d only hear on the west coast of Ireland.”