The In Between Cafe 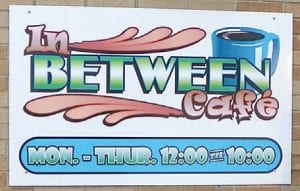 FLINT TWP. — For four years, the Bristolwood Community of Christ Church, 1158 W. Bristol Road, has been quietly providing a safe environment for students at Baker College to study and have fun.

Conveniently located adjacent to the Baker College – Flint campus, the church opened its doors to establish the In Between Cafe for the young people in several unused rooms of its former dimly lit lower level.

It was the brainchild of Doyle Rice, who got his start working with youth for many years as a former football coach for the Swartz Creek and Grand Blanc school districts.

The Cafe has become more than just a place to eat. There are computers for students who want to study. A game room offers video games and a meeting room and study room is also being developed.

Students who hang out there are “in between” adolescence and adulthood and also come there to hang out “in between” classes which is how it got its name, Rice said. 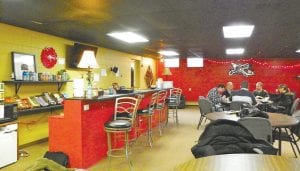 Students hanging out while enjoying a free Sunday dinner at the In-Between Cafe.

Now after a relatively quiet existence, the Cafe is ready to spread its wings and renown.

An Open House being planned for 6 p.m. March 7 is both an opportunity to share the successes of the In Between Cafe and to share a vision of what Rice and others hope it can become by branching out to other college campuses in Flint.

“Basically what we are trying to do is let the community know who we are,’’ Rice said. “It is kind of an unknown place. What is happening here is pretty beautiful.”

Another big upcoming event is a golf fundraiser where former University of Michigan head football coach, Lloyd Carr will be a special guest. Rice said he’s known Carr since they were kids playing on various grade school teams and later as coaches.

That event is being planned for 8:30 a.m. to 2 p.m. on July 29 at the Captain’s Club at Woodfield in Grand Blanc. Registrations are being accepted. Cost range from $125 general admission to $1,000 for a sponsorship foursome. Proceeds will help improve equipment and services at the Cafe. Contact Rice for details. 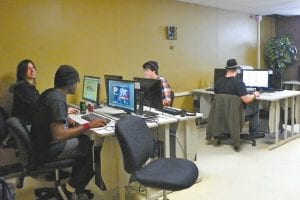 A grant-provided computer room is also a popular part of the In-Between Cafe for Baker College students.

Rice stresses that the youth Cafe is a team effort, made possible by the graciousness of the church and church volunteers and donors who have helped make it what it is today.

He also acknowledges a student leadership team who volunteer their time to run the center and plan activities.

Having students take the reins fulfilled one of Rice’s initial goal for the Cafe, but didn’t happen until about two years ago when he became to ill to come in.

“When I got back, I had what I wanted. The kids were managing it,’’ he said.

Rice, 71, now lives in Bloomfield Hills but travels to Flint makes four days a week to help the students run the center. 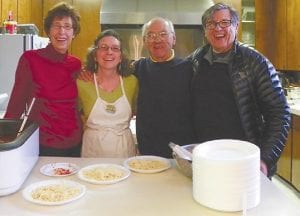 Doyle Rice, founder of the In-Between Cafe with Mary McClellan, Rita McCarthy and Fred McClellan — church members who volunteer every week to cook free Sunday dinners for students who come to the youth center.

Every Sunday, the center provides a free dinner prepared by church volunteers Mary and Fred McClellan and Rita McCarthy.

Rice stressed that though the cafe is inside the church there are no religious ties for the students.

“We are not trying to do church with these kids,’’ he said.

“What I want to do with the cafe is not build it from the inside out but from the outside in,’’ Rice said, adding that long range vision is to develop similar programs near other Flint-area campuses.

The Cafe is open daily from about noon to 10 p.m.