The life of Christopher Columbus 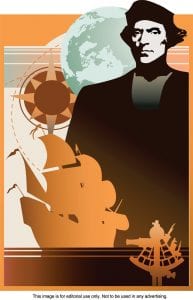 Christopher Columbus is credited with opening the passageways between Europe and the Americas for colonization. Though his famed voyage in 1492 is widely known, many people know little about the man whose explorations forever changed the course of world history.

Cristoforo Columbo was born on October 31, 1451 in the Republic of Genoa, Italy. His father, Domenico, was a middle-class wool weaver and also dabbled in cheese making. Columbus had three brothers, Bartolomeo, Giovanni, and Giacomo and a sister, Bianchinetta.

Much of Columbus’ life was spent in the world of sea and travel. He apprenticed as a business agent for important Italian families, allegedly making trips to England, Ireland and possibly Iceland and may even have made several Mediterranean and Aegean sea voyages. When he traveled to modern-day Greece, it was the closest Columbus would come to reaching Asia.

Columbus’ first voyage into the Atlantic Ocean took place in 1476, not in 1492. His commercial fleet was attacked by French privateers off the coast of Portugal, and his ship was burned. Columbus survived by swimming to Lisbon, eventually settling there and meeting his future wife, Filipa. The couple had a son, Diego, but soon after giving birth, Filipa died and Columbus relocated to Spain. Columbus sired another son, Fernando, during a relationship with Beatriz Enriquez de Arana.

Columbus participated in many different expeditions, including some to Africa to gain knowledge of Atlantic Ocean currents. He believed it would be easier to sail westward to reach India and China and avoid Muslim domination of trade routes in the Middle East. Columbus set out to find financial backing for a discovery voyage to determine what was west of Europe and to find uninterrupted water routes.

The voyager was rejected by the Portuguese king and also in Venice and Genoa. Columbus’ initial plan was also rejected by Spain. But in 1492, after Spain ended a war with Muslims, the Spaniards agreed to finance Columbus’ expedition, and in August of 1492, he set sail in the Santa Maria, with the Pinta and the Nina as companion ships.

After a five-week voyage across the ocean and a few stops in the Canary Islands for provisions, Columbus and his shipmates spotted land at roughly 2 a.m. on the morning of October 12, 1492. The crew reached land that they named San Salvador (the island now known as the Commonwealth of the Bahamas). Upon his arrival, Columbus encountered indigenous people who were friendly, but he used them to find gold and other valuables. The voyagers soon traveled to Cuba and other islands of the what became known as “The New World,” before ultimately returning to Spain.

Columbus made subsequent trips westward, but conditions at the Hispaniola settlement established by the explorer during his second voyage were deteriorating and the Spanish arrested Columbus, stripping him of his titles and authority. He eventually recovered some riches and respect, but Columbus’ legacy continues to inspire debate even now. While he may have opened up trade routes and furthered colonization around the world while paving the way for future explorers, he also helped destroy the customs of many native people.

Christopher Columbus died in Spain on May 20, 1506. Though his reputation remains a hot topic of debate, each year Americans celebrate Columbus Day on October 12th to commemorate Columbus’ life and accomplishments.

Officially celebrated in the United States since 1937, Columbus Day commemorates Christopher Columbus’ arrival in the New World on October 12, 1492. Though Columbus mistakenly believed he had arrived in Asia, famously mistaking Cuba for mainland China, after subsequent visits the now controversial explorer realized he had not reached Asia but instead found a continent the Europeans had previously been unaware of. A celebration to commemorate Columbus’ landing in the Americas was first held in the United States in 1792. Though this celebration was secular, Catholics soon organized annual religious ceremonies and parades in honor of Columbus, a professed Catholic. And though Columbus’ explorations were sponsored by Spain, the explorer was actually Italian, and to this day Italians and those of Italian heritage take pride in Columbus’ achievements and impact on the world. But while Columbus’ considerable accomplishments are a cause for celebration among many across the globe, some still protest Columbus Day.