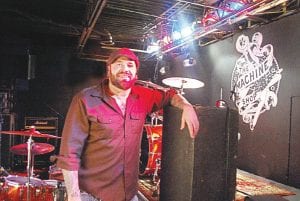 Kevin Zink takes the time to pose behind stage at The Machine Shop.

GENESEE COUNTY — The Machine Shop of Flint is celebrating its 10-year anniversary this month. Since its opening in 2002, this live music venue has been home many local and national acts.

“Ten years is a lot of bands,” said Security Manager Mike Arqell. “I have seen this place grow a lot.”

Brothers Kevin and Craig Zink, coowners of The Machine Shop, had one idea in mind when they opened the renowned venue and that was delivering rock and roll.

“Lose any preconceived notions you have because it’s in Flint and it’s on Dort Highway,” said Kevin Zink. “It’s not a biker/metal bar. It’s a live music bar that specializes in rock and roll and country.”

With local music acts like Nuroksol and The Hanger Ons, the Shop has given these small town bands the opportunity to be in the company of national music acts such as Kid Rock,

David Alan Coe and Uncle Kracker. What is unique about The Machine Shop is it’s musical acts cover a broad spectrum of rock and roll, with bands like Mushroomhead and Sevendust catering to the head banger-type rock and roller’s palette.

With the steady growth and unwavering reputation of The Machine Shop, the roots of the venue have remained intact.

Roadies line the back wall waiting to sell merchandise. Pin-up girls and an old-school motorcycle still act as decor near the stage area. The most noticeable change is the growing number of band photos graced with slashing signatures of the famous or up and coming.

Kevin Zink has a hard time putting his finger on exactly which act has been his favorite this past decade.

“There are way too many memories. I am a big fan of Candlebox and Clutch. To have those bands come here and play and have them over to the house,” he said. “It has become where we are just brothers and that is the stuff that has really meant a lot to me, to become friends with (the acts).”

Local radio station Banana 101.5 FM has been doing remotes from The Machine Shop since the early years.

“Working for the Banana, we have such a great relationship with (The Machine Shop). It’s a win- win for the both of us,” said radio personality Maggie Bon Meadows. “We get so many opportunities because of the bands they book here.

“Even though I am technically working, it’s still fun. It’s the best gig in the world to be able to broadcast from here,” she said.

For the Zinks, they believe something special has lifted their music venue to its status at home and abroad.

“There is no way to duplicate it. Something special happened here,” said Kevin Zink. “It is a combination of things between the Flint blue collar rock and rollers. I don’t think a lot of people locally realize it; but on a national music level we are well- recognized for it.”

A regular band named The Hanger Ons has been playing The Machine Shop on and off for the past year. Lead vocalist Eric Fridline said, “it’s the way Kevin is with the bands. It keeps them coming back.”

In an interview given in April of 2008, Joshua Hansly, the bassist for the band Hurt who is signed with Capitol records boasted, “There is really no place in this country that I know of that is comparable to The Machine Shop.”

The Machine Shop is, for many, a diamond in the rough and continues to receive rave reviews.

That success is something Kevin Zink said he wants to keep going in the years ahead.

“We are not going anywhere,” said the Shop’s DJ and lighting connoisseur, affectionately known to patrons and friends as Jimi Buttcrack. “I guarantee there will be a 20-year anniversary.”

More shows are planned for the coming year. Uncle Kracker, Sponge, Saliva and Puddle of Mudd are just some of the shows scheduled for the Spring. In celebration The Machine Shop is posting past flyers from the last 10 years on-line. They can be found at www.themachineshop. info.