The magic of learning 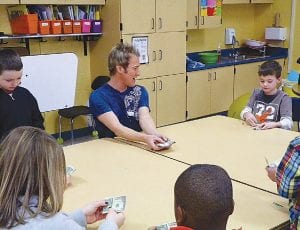 With a flick of his wrist, award-winning illusionist Kevin Spencer flipped a plastic paper clip into the air without ripping a folded dollar bill he had carefully attached it to. The flying clip was caught by a child enrolled in a special education class at Carman-Ainworth’s Randels Elementary School, who instantly broke into peals of fascinated laughter.

Then Spencer taught the child to do the trick himself followed by more laughter and a triumphant “ta da!”

In the hands of a gifted magician like Spencer, something as simple as tying a knot in a rope can capture a child’s attention and imagination.

Such is the case for Hocus Focus, an interactive curriculum Spencer developed for special education students. The children learn by seeing, hearing and doing which studies have shown has many benefits including helping them to concentrate. By adding an element of fun to ordinary tasks, the magic tricks encourage critical thinking, problemsolving, creativity and retention among other skills. 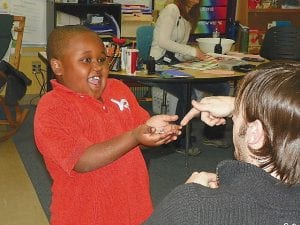 A Randels student reacts to catching a paper clip in a magic trick taught in a workshop by Kevin Spencer, award-winning illusionist.

Spencer is an award-winning illusionist who was in town last week for a performance of his acclaimed Spencer’s Theater of Illusion magic show at The Whiting on Saturday. His visit included four Hocus Focus stops at schools in Flint, Flint Township and Davison.

At Randels, he visited a K-5 self-contained special education classroom where he taught the paperclip trick, two rope tying tricks, a sleight of hand wand trick and a scarf tying trick during the 45 minutes he worked with the students.

The grant-funded visit was arranged by Christi Lackey, Whiting’s Education and Outreach Coordinator.

Spencer said the majority of his Hocus Focus audiences are junior high school age and fifth graders tend to be the most receptive group.

Several studies have demonstrated the benefits of magic as a teaching tool. Hocus Focus curriculums developed for teachers to use at school and for parents to use at home are available with other resources on the web site at www.hocusfocuseducation. 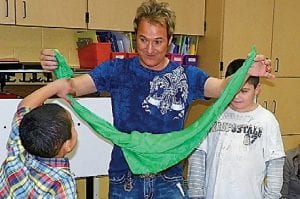 On the site, Spencer explains that the idea was born from his own rehab experience. After being involved in a serious accident in which a semicrushed his car, he suffered a closedhead and lower spinal chord injury. Frustrated by “boring exercises” during many months of physical and occupational therapy that followed, Spencer devised a way to achieve therapeutic goals by incorporating magic tricks.

Ta da! It worked so well it led to his developing a cognitive therapy program for special education students.