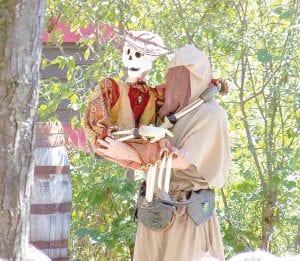 HOLLY — The end of summer signals the beginning of The Michigan Renaissance Festival for many in the state.

This last hurrah, beginning Aug. 20 and running through Oct. 2, serves as a fantastical transition into the magic of autumn.

For some devout medieval fans it is a way of life, or a hobby. For most visitors, it is a charming escape from the mundane, whereby a little magic enfolds in the spirit.

Children walk around with their faces painted, girls prance around in tutus, and ladies swirl in their gypsy skirts while fanciful jewelry sways with their every twirl.

Dads are usually sitting on benches holding a beer in one hand and a turkey leg in the other, people watching.

For those who love people watching, there is perhaps no better place to be in the state, than at the festival. Freak flags fly high and the inner child of many is on display every year.

The festival has evolved over the years with many visitors paying homage to the time period it is rooted in, while others simply wear whatever sparks their imagination. 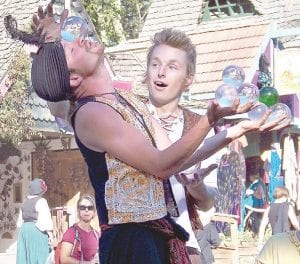 Jugglers and other roaming performers put on a during the 2010 Michigan Renaissance Festival.

A 92 year-old man was caught sporting a tshirt on the grounds a few years back that said, “wenches want me” over his pinstripe dress shirt. Clearly, very few are left out of the humor, whimsy, and escapism of the festival. ike a stunning dream sequence,

Hollygrove becomes a wonderland in its own right, ripe with the pleasures of life. Food is abundant. The ambiance is absorbing. The events and spectacles are many.

A massive amount of vendors display their wares. There are usually quite a variety including henna tents, homemade jewelry huts, transportable art showrooms, and musical instrument shops.

Each weekend during the event season is celebrated with a particular theme.

Buccaneer Beer Fest weekend debuts August 20-21 and features a vast array of brews, a tattoo contest, pig roast, and the ever bawdy Press a Wench competition.

27-28 with a men in kilts contest, the Scotch Egg Eating show Competition and a Celtic village.

Royal Ale Festival goes on Sept. 3-5 and caters to the male audience with beer tasting, a clam bake, and a hot wing competition.

Other weekends include Harvest Huzzah, Italian Carnivale, and Festival Friday which caters to the field trip crowds.

For devout fans of the old world, the festival features vow renewal ceremonies throughout the autumnal celebration.

The festival is the closest thing in the state that mimics the reverie and woodland mysticism of William Shakespeare’s A Midsummer Night’s Dream, and visitors flock by the thousands to revel in it, with an attendance of over 250,000 annually.

The Michigan Renaissance Festival is located in Holly at 12600 Dixie Highway from Aug. 20 through Oct. 2. For detailed information about the event, including prices and show times call 248-634-5552 or visit www.michrenfest.com