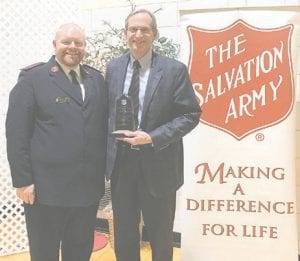 The prestigious Jack Hamady award was created in honor of Hamady’s entire life, based on the theory that hard work breeds success.

Skaff was born and raised in Flint and his commitment to the community spans his entire life. He is President of Skaff Furniture and Carpet, which has served the needs of residents and businesses since 1911.

Serving the needs of others is a daily commitment. For more than 25 years, Skaff helps serve at the Neighborhood Breakfast at First Presbyterian Church of Flint where 100 to 150 people are fed a meal. He attends youth group meetings and mentors teens, participated as a leader in mission trips with the students for the past eight years and attends many of their events during the school year. He has served as a Deacon and is an Elder in the church. 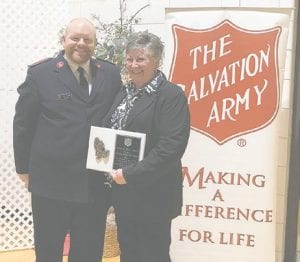 He helps at Riverside Tabernacle- The Storehouse sorting food that provides 700 boxes of food each week to those in need.

Children learning to read and be active in sports, is also a passion. Helping at Durant-Tuuri-Mott Elementary School, Randels Elementary in the Carman- Ainsworth district and the now closed Dort Elementary, Skaff reads to kindergarten classes and coached basketball and football.

Skaff and his wife Kim have been married 35 years in March. They have five children and six grandchildren.

Advisory Board president, Estes presented the 2016 Hands of Mercy Award to Heidebreicht-Benson. She has been a dedicated and hardworking member of The Salvation Army Advisory Board for two years. During Chris’s tenure on the board, she has contributed time, energy and financial support to The Salvation Army Genesee/Shiawassee County Command. She is an active member of the Community Relations/Development Committee.

She has been an active member of Flint Independent Automobile Dealers Association since 1984, an active group of approximately 150 auto dealers located within the State of Michigan. Additional dealerships and affiliations are spread across Ohio. She serves as treasurer currently and has held this position for over five years.

Heidebreicht-Benson joined Zonta Club of Flint in 1985 and has served in every position except President. She is very content to serve on all fundraising event committees that create awareness for Zonta to build mentorship, membership and funds for programs and grants. Thousands of children’s lives have been affected through these efforts.

She is married to her wonderful husband Bob for 42 years and has two daughters Kerri and Kimberly. She has two grandchildren. — G.G.